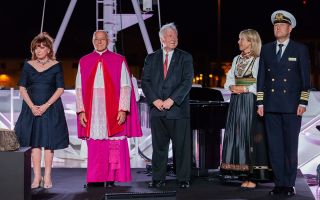 The official naming ceremony of Viking Orion took place yesterday (June 14) in Livorno, Italy. The ship is named after Orion the Hunter and in recognition of NASA's Orion spacecraft — the first crewed capsule designed to carry astronauts beyond low Earth orbit, and the last project Fisher worked on before she retired in May 2017.

Fisher was the first mother in space and among the original six female astronaut candidates selected for NASA's first class of space shuttle astronauts in January 1978. She was assigned to her first flight only two weeks before she delivered her oldest daughter. A few short months later, she flew as a mission specialist on the second flight of the space shuttle Discovery, STS-51A, in November 1984. [Cruising Constellations: Sailing the Maiden Voyage of 'Viking Orion']

After logging a total of 192 hours in space on her first Discovery flight, Fisher served NASA in many other roles, including her work on the Orion spacecraft, which will fly beyond low Earth orbit to explore deep space.

During the ceremony, Fisher was named the ceremonial godmother of Viking Orion and offered her blessing of good fortune and safe sailing — a naval tradition that dates back thousands of years. Fisher used a historic Viking broadax to cut a ribbon during the christening, signifying the ship is ready to set sail.

"Vikings consider themselves good explorers — we have been exploring the seas and oceans … but we thought we should have help from somebody who could explore the universe," Torstein Hagen, chairman of Viking, said during the ceremony. "So, we have as our godmother, Dr. Anna Fisher."

As part of the official naming ceremony, Monsignor Liberio Andreatta, who reports to the cardinal vicar of the pope, blessed the ship. During the ship's float-out ceremony in September 2017, the Rev. Dino Cecconi, the chaplain of the Port of Ancona, also blessed the ship.

"It is such an honor to be here today," Fisher said during the ceremony. "One of the things that really impressed me today is how similar the space business is to what [Viking does] here. The attention to detail; to safety — to making everything perfect."

Fisher invited her family, friends and colleagues to the naming ceremony onboard the Viking Orion.

Fisher presented Hagen and Karine Hagen, Viking senior vice president, with official NASA astronaut flight jackets, which were adorned with mission patches from many of her colleagues at the naming ceremony. Lockheed Martin, the prime contractor for the Orion spacecraft, also gave the ship a gift in recognition of the connection between NASA's mission and the ship's namesake."At the float-out ceremony, I was incredibly moved because, for those of my astronaut friends here, it reminded me very much of a rollout of a shuttle orbiter — the people in the shipyard were ever as protective of this amazing ship," Fisher said.

The official naming of the ship featured a fantastic display of Orion mythology, Norwegian musicians and a man flying a jetpack around the ship to deliver the ceremonial Viking broadax. The evening ended with a fireworks display before the ship set sail for Portofino.

Editor's Note: Samantha Mathewson is traveling on an invitation from Viking as part of an unpaid media preview event for Viking Orion.