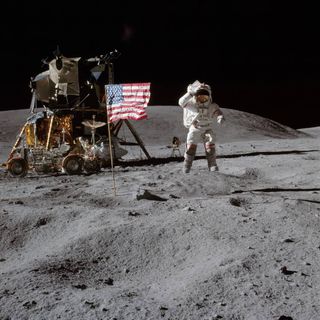 NASA astronaut John W. Young, commander of the Apollo 16 lunar landing mission, is pictured here with the American flag on the surface of the moon. The low-gravity environment allowed him to leap from the lunar surface.
(Image: © NASA)

Walking on the moon is no bounce in the park, but new space boots created by researchers at the Massachusetts Institute of Technology might make working outside a spacecraft safer for astronauts who have to maneuver around pesky moon rocks and rough terrain in bulky spacesuits.

A NASA spacesuit — also known as an Extravehicular Mobility Unit (EMU) — is decked out with various gadgets that provide life support and technical assistance to astronauts during missions where they have to leave their spacecraft. Even without those gadgets, the suit's 14 layers of protective material alone make it pretty heavy and difficult to maneuver when walking around in a low-gravity environment like the moon.

Most astronauts fall because spacesuits limit their ability to both see and feel the terrain around them, according to the MIT researchers who created the new boots. If an astronaut trips, they risk puncturing their spacesuit and may waste time and precious oxygen reserves trying to get up. [Gallery: The Most Memorable Spacewalks in History]

However, the new space boots from MIT have built-in sensors and tiny motors that vibrate based on the terrain to help the wearer navigate safely around or over nearby obstacles, the MIT researchers said in a statement debuting the new shoes.

While the new space boots are still in the early stages of development, the researchers from MIT's Department of Aeronautics and Astronautics (AeroAstro) and the Charles Stark Draper Laboratory have conducted preliminary tests to assess where the sensors should be placed on the shoe to provide the best navigational clues to the wearer. Based on their findings, the researchers are working to develop a boot with motors at three locations: the toe, heel and the front of the outside of the foot.

"This study helped inform the language we will use to map the vibration signal to the information on obstacle location and navigation direction for the astronaut," Leia Stirling, an assistant professor of AeroAstro, told Space.com in an email. "Providing this information to the astronaut may make them more confident and efficient during extravehicular activities and may decrease their injury risk due to trips and falls."

New and more flexible spacesuits are already in the works to meet the demands of future Mars missions, and these boots may help astronauts better navigate the Martian surface, where the gravity is one-third of Earth's. The new boots may also find broader use elsewhere, such as helping the visually impaired.

"Trying to provide people with more information about the environment — especially when not only vision but other sensory information, auditory as well as proprioception, is compromised — is a really good idea," Shirley Rietdyk, a professor of health and kinesiology at Purdue University who studies the neurology and biomechanics of falls, said in the statement. "From my perspective, [this work could be useful] not only for astronauts but for firemen, who have well-documented issues interacting with their environment, and for people with compromised sensory systems, such as older adults and people with disease and disorders."