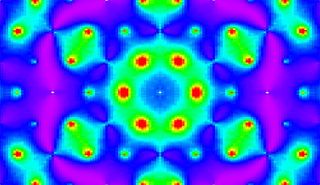 Magnetic monopoles are single, lonesome north or south magnetic poles that are predicted to exist in our universe, but haven't yet been glimpsed in their expected form.
(Image: © NIST)

We're used to magnets coming in two side-by-side flavors; north is always paired with south. If you take a magnet and chop it in half, you don't get an isolated north or south pole. Instead, you get two mini-magnets, each sporting its own pair of poles.

There's no superfundamental reason that single, lonesome north or south poles, called magnetic monopoles, should be forbidden in our universe. It just appears to be so. In the 1800s, scientist James Clerk Maxwell was putting the pieces together of our modern theory of electromagnetism, thus uniting magnetism, electricity and light under a single roof. When he looked around, though, he failed to see any monopoles, and wrote that into the equations: no monopoles, not here. [8 Baffling Astronomy Mysteries]

But Maxwell's electromagnetism is a classical theory and has been subject to enhancements and upgrades of the quantum variety in the past hundred years, and those upgrades allow for some pretty interesting creatures to roam our cosmos — among them, magnetic monopoles.

To hunt for monopoles, we have to go back to (nearly) the beginning: the earliest moments of the Big Bang itself. In those hot, crazy, frenetic days, the physics of the cosmos were radically different from what they are today. Indeed, the density and temperature of the entire universe was so high that some, if not all, of the fundamental forces of nature were melded together into a unified whole.

We don't have nearly the complete story, but we do know that the electromagnetic and weak nuclear forces merge together under the right conditions, leaving only three forces of nature at play: gravity, the strong nuclear force and the "electroweak" force. Go to even higher energies, like those found in the first fraction of a second after the Big Bang, and the strong force joins the unification party, leaving just gravity and what's called a grand unified theory, or GUT.

(Unifying gravity into the picture is a whole other can of quantum worms, and I'll leave that story for another day.)

While we only have hints of what a GUT force would look like and how it would behave, we do have some interesting ideas of how it would eventually split into the more modern forces that we know and love today.

The splitting of the GUT force is thought to be violent and sudden, quaking through the infant universe in the tiniest fraction of a second. That dramatic phase transition could have left defects — tiny knots, whorls and lines in the fabric of space-time itself. Imagine a cube of water suddenly freezing over; the resulting ice isn't perfectly uniform, as different regions of the water freeze at different rates and at different times. The neighboring crystal structures don't neatly align, leading to visible defects in the ice.

Some of these defects, left over from the GUT phase transition in the early universe, take on all the properties of a single, lonely magnetic pole. And because this phase transition subsumed the entire volume of the universe and was a pretty awesomely energetic event, our modern cosmos ought to be absolutely flooded with these exotic beasts.

Indeed, they shouldn't be exotic at all. If this GUT story is correct, monopoles ought to be as familiar as neutron stars or black holes. Strange, yes, but perfectly observable.

When in doubt, inflate

When this issue first cropped up in the late 1960s, it had plenty of cosmologists worried. We knew the Big Bang story was largely correct, thanks to major lines of evidence like the cosmic microwave background and the distribution of ;distant radio quasars. And the Standard Model of particle physics was becoming … well, standard. So while we didn't fully understand GUT-level physics, it seemed to be on the right track.

So where did all the monopoles go?

It was cosmologist Alan Guth who first proposed a solution: Perhaps the GUT phase transition that flooded the universe with magnetic monopoles also made them go away. He introduced a model where the GUT transition triggered a period of exorbitantly rapid expansion through a process known as inflation.

This inflation event saw the entire universe expanding far more than any local observable patch. It means that what's beyond the limits of what we can see is just … more stars, galaxies, and other familiar cosmic entities. In this picture there's a lot of universe out there. Way more universe. A factor of 10^62 more universe.

And this is how Guth solved the monopole problem: by sweeping it under the cosmological rug. Monopoles are produced; then the universe inflates, driving them very far away from each other. By design in the mathematics of inflation, each observable patch of the universe would then contain, on average, just a single monopole, rendering these exotic creatures essentially undetectable despite their early prolific production.

Of course, inflation is a hypothetical solution to a hypothetical problem. Perhaps we're wrong about GUT physics and monopole production is a nonstarter. And we don't exactly understand the mechanisms of inflation, either. But that model has become a fixture of modern-day cosmology because, GUT monopoles or not, inflation is a handy device for explaining so many other features of the universe.

Why is the universe so flat? Because inflation made it so big that it can't help but be flat, like a tiny ant measuring the local curvature of an overinflated balloon. [The Universe Is Flat — Now What?]

Why do large patches of the cosmic microwave background have roughly the same temperature, despite being so far apart that there wasn't enough time in the early universe to even them out? Because they were connected before inflation ripped them apart.

Inflation theory goes one step further: It makes firm predictions about how matter ought to be clumped together on large scales — predictions that agree with later observations.

So what started as an out-there solution to an out-there problem turned into a cornerstone of modern cosmology.

Learn more by listening to the episode "Iceland Question Bonanza!" on the Ask A Spaceman podcast, available on iTunes and on the web at askaspaceman.com. Thanks to the AstroTourists who joined in me in Iceland for the open-ended Q&A for the questions that led to this piece! Ask your own question on Twitter using #AskASpaceman or by following Paul @PaulMattSutter and facebook.com/PaulMattSutter. Follow us @Spacedotcom, Facebook and Google+. Original article on Space.com.