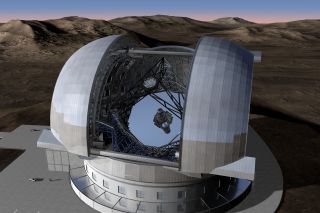 Top view of the 3-dimensional model of the European Extremely Large Telescope and its enclosure.
(Image: © ESO)

In the mountains of Chile sits the site of what will become the largest optical telescope in the world. The Extremely Large Telescope (ELT) will have a primary mirror made up of almost 800 individual segments and will be capable of collecting more light than all of the existing 8-to-10-meter telescopes on the planet, combined.

"The ELT will produce discoveries that we simply cannot imagine today, and it will inspire people around the world to think about science, technology and our place in the universe," Tim de Zeeuw, ESO's Director General, said in a statement.

Telescopes are made up of primary and secondary mirrors. Until the last few decades, these mirrors were made up of a single rigid piece of glass. The largest single-pane, or monolithic, mirrors currently in use can be found on the Large Binocular Telescope (LBT), each with a diameter of 27.5 feet (8.4 meters).

But technology limits how large a monolithic mirror can be made, and the LBT skirts it. Building even larger mirrors requires using segments that work together as a unit to collect light. The Keck telescopes in Hawaii and the James Webb Space Telescope are two examples of telescopes using segmented mirrors.

The ELT will consist of a 128-foot (39 m) main mirror made up of 798 individual hexagon segments. Each segment will measure 4.6 feet (1.4 m) across, with a thickness of 2 inches (5 centimeters). Together, the segments will collect tens of millions of times as much light as the human eye.

"As much as we astronomers always aim for ever bigger telescopes, the core purpose of such a revolutionary project as the ELT is to find the right balance between scientific capability and cost efficiency. ESO has always managed to lead ground-based astronomy and built front-line telescopes thanks to this approach," de Zeeuw said. "With the new ELT design we can still satisfy the bold science goals and also ensure that the construction can be completed in only 10 to 11 years. This will allow the ELT to operate simultaneously with the James Webb Space Telescope."

The ELT will sit in the Cerro Armazones, Chile, where high altitudes and low humidity make it a choice site for telescopes. The site was selected in 2010, and in 2011 the Chilean government donated land for the instrument, while committing to keep an additional 140 square miles (362 square kilometers) free of buildings that could interfere with the telescope's observations.

"Chile has the clearest skies on Earth and hosts the most important centers for astronomical observation," Chilean Minister of Foreign Affairs Alfredo Moreno said in a statement. "It is part of our assets and also part of our contribution to humanity."

The first-stone ceremony for the telescope occurred in 2017. In addition to kicking off the construction of the ELT, the ceremony also included the sealing of a time capsule prepared by ESO.

The ESO has a live image of Cerro Armazones taken from Cerro Paranal that is updated every hour during the daytime. You can watch the construction here.

In 2018, the first six hexagonal segments for the ELT's main mirror were successfully cast in Germany. More than 900 segments will ultimately be cast — 798 for the main mirror, plus a spare set of 133. When fully up to speed, the production rate will be about one segment per day.

"It was a wonderful feeling to see the first segments being successfully cast," Marc Cayrel, an engineer at ESO, said in a statement. "This is a major milestone for the ELT!"

The science of the ELT

The massive segmented primary mirror of the ELT will allow it to perform groundbreaking science, scoping out extrasolar planets, shining light on other galaxies, and improving the understanding of the fundamental laws of physics.

One of the most intriguing and exciting aspects of the ELT science program will be the discovery and characterization of planets and protoplanetary systems around other stars. The ELT should be able to discover worlds down to Earth-like masses, as well as directly image larger planets and potentially characterize their atmospheres. It will observe giant planets around young stars and in star-forming regions, tracing their evolution over time.

The ELT "will answer fundamental questions regarding planet formation and evolution, the planetary environment of other stars, and the uniqueness (or otherwise) of the solar system and Earth," the ESO says on their site.

The ELT will also be able to peer into the heart of galaxies to count their stars. Currently, astronomers can only resolve individual stars in our own galaxy and its nearest neighbors, none of which are elliptical galaxies.

"A galaxy's stellar populations carry a memory of its entire star formation history, and decoding this information offers detailed insights into the galaxy's past," the ESO says.

The ELT will be able to precisely resolve the stellar populations of more distant galaxies, including the giant elliptical galaxies of the Virgo cluster, providing detailed information about star formation, metal enrichment, and the movement history of nearby galaxies.

The ELT will also be able to look at more distant galaxies, surveying hundreds of massive galaxies at their most distant. By providing scientists with information about their ages, stellar masses, star formation rates, metallicities, and more, the ELT will lead towards a better understanding of galaxy formation. The telescope will also push back to the end of the "dark ages," when galaxies were first beginning to form after the Big Bang, to identify some of the first galaxies and their properties.

The massive instrument will also help to shine some light on the expanding universe. By helping scientists discover and identify distant types of supernovae, the standard candles of the universe, the ELT will help map out the universe and the history of its expansion. It will also provide insight into dark energy.

"The ELT will also attempt, for the first time, to constrain dark energy by directly observing the global dynamics of the universe," the ESO says. "This measurement will offer a truly independent and unique approach to the exploration of the expansion history of the universe."

The next generation telescopes

"Extremely Large Telescopes are considered worldwide as one of the highest priorities in ground-based astronomy," the ESO says on its website. "They will vastly advance astrophysical knowledge, allowing detailed studies of subjects including planets around other stars, the first objects in the Universe, super-massive black holes, and the nature and distribution of the dark matter and dark energy which dominate the Universe."

The ELT is not the only ELT being built. The Thirty Meter Telescope (TMT) was set for construction on Mauna Kea, Hawaii, until problems arose with its construction permit in 2015. Currently, the TMT is on hold, with its organizers considering an alternate location in La Palma in the Canary Islands.

Another ELT under construction is the Giant Magellan Telescope (GMT), which is also being built in Chile. GMT will combine seven 8.4-meter mirrors to create an effective aperture of 24.5 meters. The telescope is expected to begin operations by 2025.