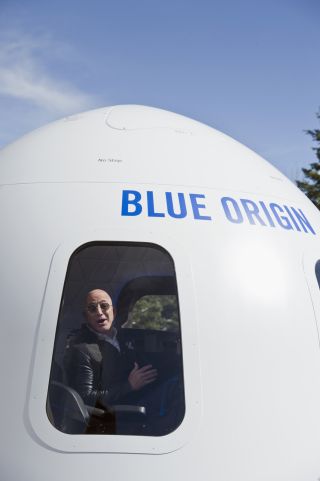 Jeff Bezos, founder of the private spaceflight company Blue Origin, inside a replica of the New Shepard human capsule that the company plans to use to fly tourists into space.
(Image: © Space Foundation/Tom Kimmel Photography)

LOS ANGELES — Before laying out his ambitious plan for humanity's future in space, Amazon and Blue Origin founder Jeff Bezos had a bit of news to deliver during a gala dinner Friday night (May 25).

"During dinner, 10 minutes ago, I just got word that 'The Expanse' was saved," he said, referring to the futuristic space television series that was canceled by Syfy. Fans had urged Amazon Studios, which owns the U.S. streaming rights, to pick up the show for another season; the efforts included celebrity endorsements and even a banner flying over the company's headquarters.

Attendees filling the ballroom erupted in thunderous applause as a table full of "The Expanse" cast and crew members cheered and hugged one another. This was the first official announcement of the pickup. ['The Expanse's' Cas Anvar Talks Science, 'Floaty Arms' and a Thrilling New Season]

Bezos announced the new development here at the Governors' Dinner at the National Space Society's International Space Development Conference. For his contribution to spaceflight, Bezos received the society's Gerard K. O'Neill Memorial Award for Space Settlement Advocacy, which O'Neill's widow, Tasha, presented to him. (Gerard K. O'Neill was a physicist and proponent of space colonization.)

Once the cheering died down, Bezos chatted space journalist Alan Boyle to lay out his expansive vision for where — just like on the TV show — millions of people will live and work in space colonies (although, hopefully, with less cross-solar-system conflict). Bezos said he and his spaceflight company, Blue Origin, can help save the world like he saved "The Expanse" — not from cancellation, but from stagnation and decline.

During the chat, the billionaire positioned himself as the successor to the late O'Neill, a former Princeton University professor who envisioned massive, Earth-like colonies floating in space during the 1970s in his book "The High Frontier."

"Professor O'Neill was very formative for me," Bezos said. "I read 'The High Frontier' in high school. I read it multiple times. And I was already primed. And as soon as I read it, it made sense to me. It seemed very clear that planetary surfaces were not the right place for an expanding civilization inside the solar system."

"For one, they're not that big," he added. "There's another argument I always make too, [which] is, they're hard to get to. [If] we build our own colonies, we can do them in near-Earth vicinity, because people will want to come back to Earth. Very few people — for a long time, anyway — are going to want to abandon Earth altogether." [Blue Origin Launches New Shepard Space Capsule on Highest Test Flight Yet]

By using the resources on the moon and in the asteroid belt, humans could build massive colonies to escape the limitations of Earth and avoid society's stagnation; the finite resources on Earth would keep humanity from growing to its full potential.Bezos said he thinks that is "a very bad future." "It's not the future that I want for my grandchildren or my grandchildren's grandchildren," he said. "And I doubt anybody in this room wants that for their descendants."

"In the not-too-distant future — I'm talking decades, maybe a hundred years — it'll start to be easier to do a lot of the things we currently do on Earth in space because we'll have so much energy," he said, referring to space outposts run on solar power.

Bezos said that, to begin moving down this road, he founded Blue Origin in 2000. He sells about $1 billion worth of stock each year to fund the rocket company, whose motto in Latin is "Gradatim ferociter" (which means "Step by step, ferociously.")

Bezos drew a comparison between space colonization and his online business empire. When he started Amazon.com to sell products online, there was already a network (the internet) connected to personal computers, a payment system (credit cards) and multiple delivery systems (postal services, UPS, etc.). That infrastructure allowed online commerce to grow enormously.

Blue Origin's goal is to build a similar infrastructure so that entrepreneurs can expand into space. The company is developing two large, reusable rockets — called New Glenn and New Armstrong — in an effort to significantly bring down the cost of launching payloads into space.

"When we have that entrepreneurial dynamism in space, you will see how fast this vision … will happen," he said.