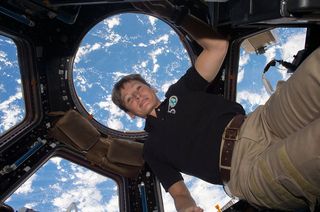 NASA astronaut Peggy Whitson has spent more time in space than any other U.S. astronaut in history. From growing up on a farm in Iowa's smallest town to living and working at the International Space Station (ISS), Whitson has called many places home. But if you ask her where her home is now, the answer is simple: "planet Earth."

In the final episode of "One Strange Rock," which airs tonight (May 28) on the National Geographic Channel, Whitson talks about what it was like to leave the ISS for the last time, having spent a total of 665 days in space throughout her career as an astronaut. The episode, titled "There's No Place Like Home," shows Whitson and her two Soyuz crewmates — NASA astronaut Jack Fischer and Russian cosmonaut Fyodor Yurchikhin — departing the orbiting laboratory and returning to Earth with a fiery, high-speed plunge into the atmosphere.

The finale also features exclusive videos from inside the ISS filmed by Paolo Nespoli, a European Space Agency astronaut turned videographer who shot scenes for the documentary series during his time in orbit. Nespoli's footage depicts a day in the life of Whitson on the ISS, including scenes of her weightlessly zipping around the space station, brushing her teeth and gazing out the enormous Cupola window. [In Photos: Record-Breaking Astronaut Peggy Whitson Returns to Earth]

Space.com spoke with Whitson about what it was like to return home after her historic, record-breaking mission at the ISS — and how spending so much time in space changed her perspective on what she considers to be her home.

"Home for me when I was growing up was, of course, the farm [in Beaconsville, Iowa] and the small community around it," Whitson told Space.com. After starting school at Iowa Wesleyan College, "home became a little bit bigger, because it expanded to the other side of the state," she said. "Then I left Iowa and went to Texas" to work at NASA's Johnson Space Center, where she considered the whole state her home, she said. "I started traveling to Russia a lot, and so home became the United States of America, but I think once I left the planet, home was planet Earth. So, I think it's all about perspective."

Whitson is not the only astronaut to feel this way about Earth. Throughout the "One Strange Rock" series, the eight astronauts talked about how seeing Earth from space has changed their perspectives about where they come from. This psychological phenomenon is common among space travelers and is often referred to as "the overview effect." From space, astronauts don't see borders between nations. Instead, they see a unique and beautiful world where all living things share a special connection through their common origin — and a planet where life has had a noticeable impact on its geological features.

"In my first flight, I think what really surprised me is just how thin the atmosphere is," Whitson told Space.com. "It looks very delicate, and I came away from my first flight with this new appreciation of how we're all sharing the same air, we're all sharing the same planet, and we need to take care of it," she said. "There was definitely a new appreciation for what our planet does for us."

Although she has no plans to return to space (she has already broken the record for the oldest female astronaut at age 57), Whitson said she would love to go back for a mission to the moon, Mars or maybe even a habitable exoplanet, if given the opportunity. When it comes to alien worlds, she is optimistic that humans will one day find life elsewhere in the universe.

"Looking out into space and seeing thousands and thousands of stars and recognizing that all these stars are in our galaxy, and there's actually billions and billions of galaxies— absolutely by sheer numbers I think there will be life out there," Whitson said. "It may not look the same as us or be based on the same principles as us, but we'll find it."

Earth will always be the best place for our bodies to survive and thrive, and living on another planet certainly wouldn't be easy. But Whitson said she would love to continue living in a weightless environment like the ISS. "The floating, the sleeping, just being in zero gravity — it's so much easier to move. My joints don't ache nearly as much up there," Whitson told Space.com. "I love being in space. That zero-gravity part is really nice. Gravity sucks."

Don't miss Whitson on the series finale tonight of "One Strange Rock," which airs on the National Geographic Channel at 10 p.m. EDT/PDT (9 p.m. CDT).