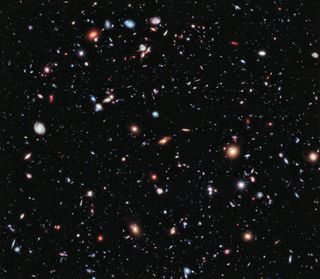 Called the eXtreme Deep Field, or XDF, the photo was assembled by combining 10 years of NASA Hubble Space Telescope photographs taken of a patch of sky at the center of the original Hubble Ultra Deep Field. The XDF is a small fraction of the angular diameter of the full Moon. Image released September 25, 2012.
(Image: © NASA, ESA, G. Illingworth, D. Magee, and P. Oesch (University of California, Santa Cruz), R. Bouwens (Leiden University), and the HUDF09 Team)

Galaxies — those vast collections of stars that populate our universe — are all over the place. But how many galaxies are there in the universe? Counting them seems like an impossible task. Sheer numbers is one problem — once the count gets into the billions, it takes a while to do the addition. Another problem is the limitation of our instruments. To get the best view, a telescope needs to have a large aperture (the diameter of the main mirror or lens) and be located above the atmosphere to avoid distortion from Earth's air.

Perhaps the most resonant example of this fact is the Hubble eXtreme Deep Field (XDF), an image made by combining 10 years of photographs from the Hubble Space Telescope. The telescope watched a small patch of sky in repeat visits for a total of 50 days, according to NASA. If you held your thumb at arm's length to cover the moon, the XDF area would be about the size of the head of a pin. By collecting faint light over many hours of observation, the XDF revealed thousands of galaxies, both nearby and very distant, making it the deepest image of the universe ever taken at that time. So if that single small spot contains thousands, imagine how many more galaxies could be found in other spots.

While estimates among different experts vary, an acceptable range is between 100 billion and 200 billion galaxies, said Mario Livio, an astrophysicist at the Space Telescope Science Institute in Baltimore, Maryland. When the James Webb Space Telescope launches in 2020, the observatory is expected to reveal even more information about early galaxies in the universe.

To the best of Livio's knowledge, Hubble is the best instrument available for galaxy counting and estimation. The telescope, launched in 1990, initially had a distortion on its main mirror that was corrected during a shuttle visit in 1993. Hubble also went underwent several upgrades and service visits until the final shuttle mission there in May 2009.

In 1995, astronomers pointed the telescope at what appeared to be an empty region of Ursa Major, and collected 10 days' worth of observations. The result was an estimated 3,000 faint galaxies in a single frame, going as dim as 30th magnitude. (For comparison, the North Star or Polaris is at about 2nd magnitude.) This image composite was called the Hubble Deep Field and was the farthest anyone had seen into the universe at the time. [Related: Brightest Stars: Luminosity & Magnitude]

As the Hubble telescope received upgrades to its instruments, astronomers repeated the experiment twice. In 2003 and 2004, scientists created the Hubble Ultra Deep Field, which in a million-second exposure revealed about 10,000 galaxies in a small spot in the constellation Fornax.

In 2012, again using upgraded instruments, scientists used the telescope to look at a portion of the Ultra Deep Field. Even in this narrower field of view, astronomers were able to detect about 5,500 galaxies. Researchers dubbed this the eXtreme Deep Field.

All in all, Hubble reveals an estimated 100 billion galaxies in the universe or so, but this number is likely to increase to about 200 billion as telescope technology in space improves, Livio told Space.com.

"This is assuming that there is no large cosmic variance, that the universe is homogenous," Livio said. "We have good reasons to suspect that is the case. That is the cosmological principle."

The principle dates back to Albert Einstein's theory of general relativity. Einstein said that gravity is a distortion of space and time. With that understanding in hand, several scientists (including Einstein) tried to understand how gravity affected the entire universe.

"The simplest assumption to make is that if you viewed the contents of the universe with sufficiently poor vision, it would appear roughly the same everywhere and in every direction," NASA stated. "That is, the matter in the universe is homogeneous and isotropic when averaged over very large scales. This is called the cosmological principle."

One example of the cosmological principle at work is the cosmic microwave background, radiation that is a remnant of the early stages of the universe after the Big Bang. Using instruments such as NASA's Wilkinson Microwave Anisotropy Probe, astronomers have found the CMB is virtually identical wherever one looks.

Would the number of galaxies change with time?

Measurements of the universe's expansion — through watching galaxies race away from us — show that it is about 13.82 billion years old. As the universe gets older and bigger, however, galaxies will recede farther and farther from Earth. This will make them more difficult to see in telescopes.

This is where the concept of the "observable universe" — the universe that we can see — comes into play. In 1 trillion to 2 trillion years, Livio said, this means that there will be galaxies that are beyond what we can see from Earth.

"We can only see light from galaxies whose light had enough time to reach us," Livio said. "It doesn't mean that that's all there is in the universe. Hence, the definition of the observable universe."

Galaxies also change over time. The Milky Way is on a collision course with the nearby Andromeda Galaxy, and both will merge in about 4 billion years. Later on, other galaxies in our Local Group — the galaxies closest to us — will eventually combine. Residents of that future galaxy would have a much darker universe to observe, Livio said.

"Civilizations started then, they would have no evidence that there was a universe with 100 billion galaxies," he said. "They would not see the expansion. They would probably not be able to tell there was a Big Bang."

What about other universes?

As the early universe inflated, there are some theories that say that different "pockets" broke away and formed different universes. These different places could be expanding at different rates, include other types of matter, and have different physical laws than our own universe.

Livio pointed out there could be galaxies in these other universes — if they exist — but we have no way right now of knowing for sure. So the number of galaxies could even be greater than 200 billion, when considering other universes.

In our own cosmos, Livio said, astronomers will be better able to refine the number upon the launch of the James Webb Space Telescope (for which his institute will manage the mission operations and science). Hubble is able to peer back at galaxies that formed about 450 million years after the Big Bang. After James Webb launches in 2020, astronomers anticipate they can look as far back as 200 million years after the Big Bang.

"The numbers are not going to change much," Livio added, pointing out the first galaxies probably formed not too long before that. "So a number like 200 billion [galaxies] is probably it for our observable universe."

While it is interesting to count the number of galaxies in our universe, astronomers are more interested in how galaxies reveal how the universe was formed. According to NASA, galaxies are a representation of how matter in the universe was organized – at least, on the large scale. (Scientists are also interested in particle types and quantum mechanics, on the small side of the spectrum.) Because Webb can look back to the early days of the universe, its information will help scientists better understand the structures of the galaxies around us today.

"By studying some of the earliest galaxies and comparing them to today's galaxies, we may be able to understand their growth and evolution. Webb will also allow scientists to gather data on the types of stars that existed in these very early galaxies," NASA said of Webb's mission. "Follow-up observations using spectroscopy of hundreds or thousands of galaxies will help researchers understand how elements heavier than hydrogen were formed and built up as galaxy formation proceeded through the ages. These studies will also reveal details about merging galaxies and shed light on the process of galaxy formation itself."

According to NASA, here are some of the key questions Webb will answer about galaxies:

Scientists are also interested in the role that dark matter plays in the assembly of galaxies. While some of the universe is visible in forms such as galaxies or stars, dark matter is what makes up most of the universe — about 80 percent of it. While dark matter is invisible in wavelengths of light or through emissions of energy, studies of galaxies dating back to the 1950s indicated there was far more mass present in them than what was visible with the naked eye.

"Computer models that scientists have made to understand galaxy formation indicate that galaxies are created when dark matter merges and clumps together," NASA said. "It [dark matter] can be thought of as the scaffolding of the universe. The visible matter we see collects inside this scaffolding in the form of stars and galaxies. The way dark matter 'clumps' together is that small objects form first, and are drawn together to form larger ones."

Webb's powerful mirrors will allow scientists to look at galaxy formation — including the role of dark matter — up close. While this investigation doesn't directly answer how many galaxies there are in the universe, it does help scientists better understand the processes behind the galaxies we see, which in turn better informs models about galactic populations.