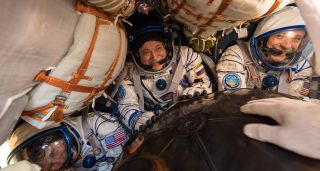 Search and rescue teams deployed from the Karaganda Airport in Kazakhstan to Zhezkazgan to prepare for the arrival of the three crewmembers in the Soyuz MS-04 space capsule.

Oleg Orlov, director of the Russian Institute for Biomedical Problems, looks out the window of an AN-26 aircraft as support teams pre-position to Zhezkazgan, Kazakhstan ahead of the landing.

A bus carrying members of the search and rescue teams arrive in Zhezkazgan, Kazakhstan.

Helicopters Arrive on the Scene

Early in the morning on Saturday, Sept. 2, helicopter search and rescue teams prepared to deploy ahead of the Soyuz MS-04 landing.

Russian search and rescue teams fly an Mi-8 helicopter and search the horizon for the Soyuz MS-04 capsule.

Watching from the Window Seat

Andrey Shelepin (left), a photographer for the Gagarin Cosmonaut Training Center, and Aleksey Lukiyanov, head of the Search-and-Rescue Department of Rosaviatsiya (Russian Federal Air Transport Agency), look out the window from inside one of the helicopters that watched the Soyuz MS-04 land in Kazakhstan.

The Soyuz MS-04 spacecraft carrying Peggy Whitson, Jack Fischer and Fyodor Yurchikhin parachutes down through the atmosphere before coming in for a landing on the steppes of Kazakhstan.

Cruising Down to Earth

The Soyuz MS-04 spacecraft carrying Peggy Whitson, Jack Fischer and Fyodor Yurchikhin parachutes down through the atmosphere before coming in for a landing on the steppes of Kazakhstan.

A clear view of the Soyuz MS-04 spacecraft as it descended toward its landing site on the steppes of Kazakhstan.

The Soyuz MS-04 safely touched down after a nearly 3.5-hour trip from the International Space Station. What looks like an explosion beneath the spacecraft is nothing dangerous. The spacecraft's six soft-landing engines fired just seconds before touchdown to help slow down the fall.