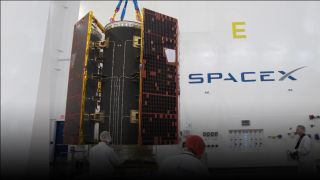 Two NASA Earth-observation satellites will have to wait a bit longer to get off the ground.

NASA's Gravity Recovery and Climate Experiment Follow-On (GRACE-FO) mission and five Iridium Next commercial communications satellites were scheduled to launch atop a SpaceX Falcon 9 rocket on Saturday (May 19) from Vandenberg Air Force Base (VAFB) in California. But the seven-satellite liftoff has now been delayed to next Tuesday (May 22).

Iridium representatives said Monday (May 14) that the launch would slip by two days, to give SpaceX time to deal with a "minor processing issue" associated with the two-stage Falcon 9, according to Spaceflight Now. And yesterday (May 15), Iridium announced that range issues at Vandenberg had tacked a third day onto the delay. [See the Evolution of SpaceX's Rockets in Pictures]

As its name indicates, GRACE-FO follows in the footsteps of NASA's GRACE mission, which characterized Earth's gravitational field from orbit in great detail from 2002 to 2017.

GRACE-FO consists of two identical spacecraft, which "will provide critical measurements that will be used together with other data to monitor the movement of water masses across the planet and mass changes within Earth itself," NASA officials wrote in a mission description. "Monitoring changes in ice sheets and glaciers, underground water storage and sea level provides a unique view of Earth's climate and has far-reaching benefits."

The mission, which is a joint venture involving NASA and the German Research Centre for Geosciences, will last at least five years.

The upcoming launch continues a long-standing relationship between Iridium and SpaceX; Falcon 9 rockets have already lofted 50 satellites for the communications company's Iridium Next constellation and will launch 75 of the craft over eight liftoffs when all is said and done.

Tuesday's mission will mark the second liftoff for the first stage of this particular Falcon 9; the booster helped launch the secretive Zuma spacecraft for the U.S. government this past January. (Zuma failed to reach orbit, reportedly because of a problem with the payload adapter that connected the satellite to the Falcon 9's upper stage. This adapter was provided by aerospace firm Northrop Grumman, which also built Zuma.)

SpaceX has landed 25 Falcon 9 first stages and re-flown such boosters 11 times to date. These activities are part of the company's effort to develop fully and rapidly reusable rockets and spacecraft, which SpaceX founder and CEO Elon Musk has said could cut the cost of spaceflight dramatically.

SpaceX is not expected to land the booster again on Tuesday. This Falcon 9 is a "Block 4" vehicle, a variant whose first stages have flown a maximum of twice. The company recently debuted its upgraded Block 5 Falcon 9, the first stages of which are designed to fly 10 times without refurbishment, and perhaps 100 times or more with some maintenance involved, Musk has said.