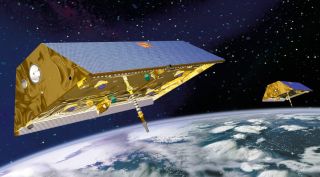 In a statement, NASA said the Gravity Recovery and Climate Experiment (GRACE) mission, carried out in cooperation with the German space agency DLR, had ended science operations after the retirement of one of its twin spacecraft.

However, NASA said in an Oct. 27 statement that "it became apparent by mid-October that GRACE-2's remaining battery capacity would not be sufficient to operate its science instruments and telemetry transmitter. Consequently, the decision was made to decommission the GRACE-2 satellite and end GRACE's science mission."

GRACE-2 is expected to reenter in December of January. GRACE-1, whose batteries remain healthy, will operate for the remainder of the year to collect calibration data. It will reenter in early 2018.

"GRACE-1's remaining fuel will be used to complete previously planned maneuvers to calibrate and characterize its accelerometer to improve the final scientific return and insights from the 15-year GRACE record," Carmen Boening, GRACE project science at NASA's Jet Propulsion Laboratory, said in a statement.

NASA and DLR launched the two GRACE spacecraft in March 2002 for what was originally planned to be a five-year mission. Scientists use measurements of very small changes in the separation of the two satellites in low Earth orbit to calculate local changes in gravitational field caused by mass variations in the Earth. Those measurements can, in turn, be used to track motions of water around the Earth caused by seasonal patterns and climate processes.

"Using cutting-edge technology to make exquisitely precise distance measurements, GRACE improved our scientific understanding of our complex home planet, while at the same time providing information — such as measurements related to ground water, drought and aquifer water storage changes worldwide — that was used in the U.S. and internationally to improve the accuracy of environmental monitoring and forecasts," said Michael Freilich, director of NASA's Earth science division, in a statement.

A successor mission, called GRACE Follow-On, has been developed by NASA and the Helmholtz Centre Potsdam German Research Centre for Geosciences. The two spacecraft will launch in early 2018 on a SpaceX Falcon 9 on a mission shared with five Iridium Next satellites.

"The entire mission team was creative and successful in its truly heroic efforts over the last few years, extending the science return of the mission to help minimize the gap between GRACE and its successor mission," said Mike Watkins, director of JPL, in a statement.