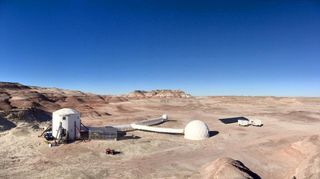 A long-running "Mars" base here on Earth will get a special virtual-reality upgrade to help its crews, if a crowdfunding campaign goes as planned.

"Phase 1 of the MarsVR program will focus on designing training simulations," the society wrote in a statement on Kickstarter. "Since every moment at MDRS is valuable, just like actual astronauts working in space, the Mars Society wants its crew members to make the most of their time 'on Mars.' We will also open-source the key elements of the platform so that the general public can freely make use of it to experience human Mars exploration."

MDRS has been hosting crews since 2002, for missions that generally last two weeks. MarsVR will include a simulation of the habitat and its surrounding environment, within 1 square mile (2.6 square kilometers). If more funds are raised beyond the $27,500 goal, the society plans to expand the simulation beyond that 1-mile radius.

Some of the many envisioned uses for the tool include research, education for youth, public outreach and providing an open-source platform for joint exploration.

"The MarsVR program will be a unique multi-phase effort designed to pioneer the emerging field of CrowdExploration, which we define as the partnership between the first astronauts on Mars and VR experts and enthusiasts back on Earth," the Mars Society added in a separate statement.

"With its new MarsVR program, the Mars Society expects to pioneer the use of virtual reality for pre-mission crew training, as well as expanding Mars advocacy and outreach among our global community," Michael Stoltz, the Mars Society's director of media and public relations, added in the statement.

You can read more details about the project at http://marsvr.io or the MarsVR Kickstarter page.