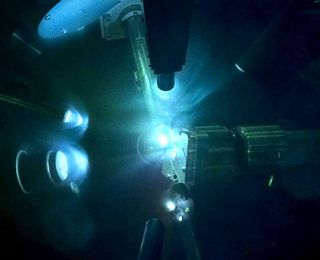 Researchers used the University of Rochester's Omega Facility used lasers to compress iron-silicon samples to the ultrahigh pressures found in the cores of distant super-Earths.
(Image: © Laboratory for Laser Energetics)

For a few billionths of a second, two samples of iron alloy felt the crushing pressure at the center of a giant, rocky planet three times the size of Earth. But rather than being on one of the 2,000 such super-Earths scientists have discovered orbiting other stars, it was here on our home planet — and it was slammed forward with a laser blast.

Little is known about what happens at Earth's core, according to researchers reporting in a new study, and even less is known about those rocky super-Earths that are larger than our planet but smaller than Neptune — a size not found in our solar system. The researchers' work marked a landmark measurement of material under pressure, and lends insight into how to model the properties of these mysterious worlds.

"We now have a technique that allows us to directly access the extreme pressures of the deep interiors of exoplanets and measure important properties," Thomas Duffy, a geoscientist at Princeton University and a co-author of the new work, said in a statement. [No Way Out? Aliens on 'Super-Earth' Planets May Be Trapped by Gravity]

The researchers predicted that rocky planets' cores are made up of iron interspersed with a lighter element, such as silicon. So they set out to understand what happens to that type of combination deep in a planet's core, according to the work's lead author, June Wicks, who was also at Princeton at the time of the research.

"We know that the Earth's core is iron alloyed with about 10 percent of a lighter element, and silicon is one of the best candidates for this light element both for Earth and extrasolar planets," Wicks, who is now a researcher at Johns Hopkins University in Maryland, said in the statement.

To measure those crystal structures, the research team blasted a high-powered laser at the sample sitting between pieces of diamond. The laser vaporized the edge of the diamond, turning some of it into plasma in the chamber, which pushed it forward and created the extremely high-pressure conditions. Immediately, they sent X-rays through the sample to measure its atomic structure — the highest-pressure conditions ever recorded with X-ray diffraction, the researchers said. They achieved 1,314 gigapascals of pressure, which is more than 13 million times the pressure at sea level on Earth, or 3.5 times the pressure at Earth's core.

The researchers found that at the highest pressures, the sample with less silicon arranged its atoms in a tightly packed, hexagonal crystal structure, whereas the one with more silicon had a cubic structure, forming cubes with one atom at the center surrounded by eight more (referred to as body-centered cubic packing).

They also measured the samples' densities under different levels of pressure and found that the alloys reached 2.5 times their density on Earth's surface — comparable to the density of gold or platinum. In a super-Earth's core, that type of material would result in a larger, lower-pressure core than one made of just iron.

"A pure iron core is not realistic," Duffy said, "as the process of planetary formation will inevitably lead to the incorporation of significant amounts of lighter elements. Our study is the first to consider these more realistic core compositions." [The Most Intriguing Alien Planet Discoveries of 2017]

Next, the researchers plan to test the impact of other light elements, such as carbon or sulfur, on iron alloys at high temperatures that could form exoplanet cores.

"The method of simultaneous X-ray diffraction and shock experiments is still in its infancy, so it's exciting to see a 'real-world application' for the Earth's core and beyond," Kanani Lee, a geophysicist at Yale University who was not involved in the research, said in the statement.

Diana Valencia, a planetary scientist at the University of Toronto-Scarborough who focuses on super-Earths and mini-Neptunes and was not involved in the study, said in the statement that the new technique used in the work is a "very significant" contribution to the field of exoplanet research.

"This is a good study because we are not just extrapolating from low pressures and hoping for the best," she said. "This is actually giving us that 'best,' giving us that data, and it therefore constrains our models better."

The study's researchers added that their technique, which can measure samples at higher pressures than ever before, will let researchers peer into the cores of potential planets with more certainty.

"For a geologist, the discovery of so many extrasolar planets has opened the door to a new field of exploration," Duffy said. "We now realize that the varieties of planets that are out there go far beyond the limited examples in our own solar system, and there is a much broader field of pressure, temperature and composition space that must be explored.

"Understanding the interior structure and composition of these large, rocky bodies is necessary to probe fundamental questions such as the possible existence of plate tectonics, magnetic field generation, their thermal evolution and even whether they are potentially habitable," he added.