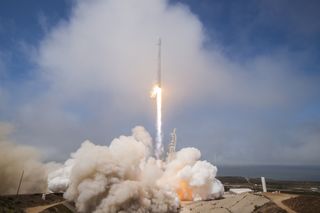 The shock wave created during the August 2017 launch of Taiwan's Earth-observing Formosat-5 satellite was circular, in contrast to the V-shaped shock waves produced by most rockets, study team members said.

"We've seen many cases of a rocket-produced disturbance, but there’s never been something that perfectly circular and with that large [an] area," study lead author Charles Lin, a geophysicist at the National Cheng Kung University in Taiwan, said in a statement.

Shock waves zoom through the atmosphere faster than the speed of sound. These waves are invisible to the naked eye, but researchers can map their contours by analyzing GPS data.

That's just what Lin and his colleagues did for the shock wave generated by the Formosat-5 launch from California's Vandenberg Air Force Base. This work allowed them to discern the wave's enormous size and to determine that the launch also punched a temporary hole in the ionosphere — a part of Earth's upper atmosphere that extends from about 45 to 620 miles (75 to 1,000 kilometers) in altitude.

The hole was created by the interaction of water vapor in the Falcon 9's exhaust with charged particles in the ionosphere above California, the researchers said. Such ionospheric disturbances can mess with GPS signals, and this hole may have caused navigation errors of up to 3.3 feet (1 meter) for an hour or two after the launch, according to the study.

Lin and his team also performed computer simulations of rocket launches, which suggested that the August 2017 shock wave's large size and odd shape were due to the unique trajectory taken by the Falcon 9.

Rockets usually take a curved path to space and drop off satellites about 120 miles (200 km) up, at which point the payloads maneuver to their final orbits. But Formosat-5 was an uncommonly light payload, so the Falcon 9 journeyed pretty much straight up and deployed the satellite at its final destination, 450 miles (720 km) above Earth's surface.

Such analyses will likely be increasingly important as the cost of building and lofting satellites continues to decrease, Lin and his colleagues said.

"Understanding how the rocket launches affect our upper atmosphere and space environment is important, as these anthropogenic space weather events are expected to increase at an enormous rate in the near future," the researchers wrote in the new study, which was published in January in the journal Space Weather.