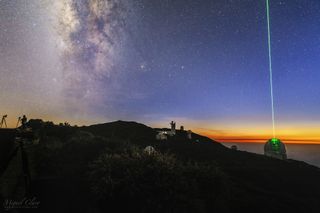 Miguel Claro is a professional photographer, author and science communicator based in Lisbon, Portugal, who creates spectacular images of the night sky. As a European Southern Observatory photo ambassador, a member of The World At Night and the official astrophotographer of the Dark Sky Alqueva Reserve, he specializes in astronomical skyscapes that connect Earth and the night sky. Join Miguel here as he takes us through his photograph "The Transition Between Day and Night."

This lovely skyscape shows the end of nautical twilight above the Roque de los Muchachos Observatory, on the Canary Island of La Palma, Spain, as the day transitions to night.

Astronomers recognize three phases of twilight, and each phase is defined by the solar elevation angle, or the position of the sun relative to the horizon. During nautical twilight, the center of the sun's disk is between 6 and 12 degrees below the horizon, and the sky turns dark blue. In clear weather conditions, the horizon is faintly visible during this twilight phase. Many of the brighter stars can also be seen, making it possible to use the position of the stars in relation to the horizon to navigate at sea — hence the term "nautical twilight."

To capture the Milky Way in a blue sky like this, photographers need the right combination of elements: nautical twilight, a clear southern horizon and the right time of year. The Milky Way isn't visible year-round, and the best time to see it depends on your location. [Gallery: Stunning Photos of Our Milky Way Galaxy]

Once the sky is sufficiently dark, we can capture not just the brightest stars, but even the Milky Way's dusty galactic core, which glows with natural colors that can blend in with the faint atmospheric glow of twilight. The core becomes more apparent after the transition to astronomical twilight, when the sun is between 12 and 18 degrees below the horizon.

Spread across the foreground of this image is a fleet of telescopes that make up the Roque de los Muchachos Observatory. One of them is the William Herschel Telescope, which can be seen on the right edge of the image, with its dome opened and bright-green laser pointed high in the sky. That laser is part of the telescope's adaptive optics system, which improves image quality by eliminating the blur created by Earth's atmosphere.