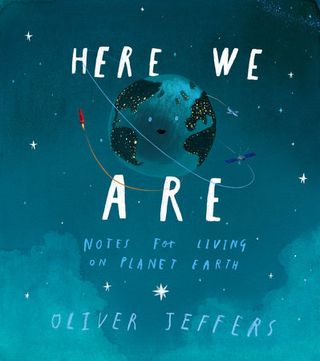 It's a good thing we don't remember being born. With an unceasing procession of strange smells, unfamiliar sights and alien sounds — not to mention cooing faces thrust into our field of vision — the first moments of post-uterine existence must have been utterly bewildering. We were barely acquainted with the mechanics of our nascent corporeal form, let alone the wider world that extended far beyond our nubby, lolling appendages.

Like any able new father, Oliver Jeffers decided to give his infant son, Harland, a primer on this strange new reality. "The start of it was when we came home from the hospital, and at the front door of our apartment I announced, 'Here we are, this is where you live!' and proceeded to give him a tour," Jeffers told Space.com.

The author and illustrator found the process of explaining the "sheer magnitude of everything, from scratch" at once absurd and overwhelming. It also formed the kernel of what would become his latest picture book, "Here We Are: Notes for Living on Planet Earth" (Philomel Books, 2017). [Best Space Books for Kids]

Explaining life on Earth to his child morphed "from purely amusing and mildly informative to being fairly sentimental as the reality of the political age we were moving into began to weigh on me," said Jeffers, who crafted such bestsellers as "The Day the Crayons Quit" (Philomel Books, 2013) and "This Moose Belongs to Me" (Philomel Books, 2012). With the divisiveness of public discourse writ large, "it seemed — and still seems — that we were entering scary times where human beings were retreating into their selfish, ignorant shells as waves of aggression and xenophobia swept the Western Hemisphere," he added.

To be clear, there is nothing in the book that will ruffle feathers at the dinner table — there's a universality and poignancy to its earnest simplicity, vim and wit. Jeffers' jewel-toned renderings, liberally sprinkled with details that invite closer inspection, evoke the planet's immensity with warmth and gentility.

"Here We Are" begins with the simple observation that we live on a globe suspended in space, which "is very big." It's sometimes hot and dry, other times cold and wet. There are bits that are bumpy, pointy or flat. We have people, plants and animals in all shapes, sizes and colors. Things move with fleeting speed or at a crawl.

The sky, as Jeffers points out, "can get pretty complicated." With his trademark humor, he marks up a spread of the firmament with notes, like how the sky is sometimes blue but "sometimes it's … uh … not." Constellations are patterns of stars. Stars, in turn, are "burning balls of gas very far away that you see at night, unless it's raining."

Depicting the scale of the bodies in orbit proved challenging, Jeffers said. So was finding room for all the trivia he had amassed in the course of his research.

"There were loads of facts I wish I could have included, but would have gotten in the way of the simplicity and rhythm of the book," he said. "Like, for example, that from Pluto the sun would just appear like a bright star, and that from the moon, the Earth never appears to move, unlike how the moon moves across our sky. How the moon is the same width as the U.S., 400 times smaller than the sun but also 400 times closer, which is why they appear the same size. We witnessed the total eclipse from Tennessee this past August, so I've been trying to explain the scale of things to my son since." [Here Are the Most Amazing Photos of the 2017 Total Solar Eclipse]

(Jeffers noted that he and his friend, Dutch illustrator Chris Haughton, have been trying for the past eight years to build a to-scale model of the solar system. "One of the complications is that, if earth were the size of a pea, you would need over 5 miles for the model at that scale," Jeffers said. They may have found a spot: in Ireland, where Jeffers grew up.)

Size, after all, is only a matter of perspective. For all its enormity — at least, from our vantage point — Earth barely registers in the vast expanse of space. We are impossibly fragile. Yet, as Jeffers underscores in his book, we're all in this together.

"We may all look different, act different and sound different … but don’t be fooled, we are all people," Jeffers writes. "There is enough for everyone."

Which is to say that somewhere within this travelogue is a manual for how to be a stand-up human being: one who is tolerant, respectful and unfailingly kind.

"My editor jokingly said that it is a book for new babies, new parents and misplaced humans;he's not wrong." Jeffers said. "Never before has it been more important to be aware of the existence of other people, and the awareness that we all live on the same planet."

Space, and how we fit into it, will continue to play a part in his work, Jeffers said. In fact, constellations feature "quite heavily" in a new body of work he's assembling.

"The series has definitely stemmed from becoming a parent, seeing the solar eclipse and creating my most recent picture book," Jeffers said. "It’s all about our place in the cosmos, connections we make — both real and imagined — and the stories we tell ourselves."

"The night sky and outer space will likely never disappear from my work," he added.