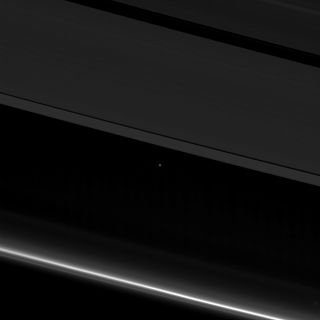 NASA's Cassini spacecraft captured this photo of Earth from Saturn at 1:41 a.m. EDT April 13 (0541 GMT, or 10:41 p.m. PDT on April 12) from 870 million miles (1.4 billion kilometers) away. At the time, the part of Earth facing Cassini was the southern Atlantic Ocean.
(Image: © NASA/JPL-Caltech/Space Science Institute)

The Cassini spacecraft spotted Earth as a bright speck (and the moon as a smaller speck) between Saturn's broad rings as the craft prepares for its final dive into the ringed planet's atmosphere.

Cassini was 870 million miles (1.4 billion kilometers) from Earth the night of April 12-13 when it snapped this photo, which shows Earth — and the even tinier moon, a faint dot to its left — framed between the icy rings of Saturn. At the time the photo was taken, the southern Atlantic Ocean was facing the spacecraft's lens, NASA officials said in a statement.

Cassini has been exploring Saturn's system for 13 years, gathering data about the rings' structure and composition as well as investigating the moons in Saturn's neighborhood and the planet itself. Tonight (April 21-22) the spacecraft will swing past Saturn's largest moon, Titan, for a final time to prepare for its Grand Finale maneuver — 22 dives in between Saturn and its rings, and a final plunge into the depths of the gas giant itself.

The outer part of Saturn's A ring is visible at the top of the photo, with its Keeler and Encke gaps, and its F ring is seen at the bottom. The Encke gap marks the path of Saturn's ravioli-shaped moon Pan, and the moon Daphnis kicks up waves in the A ring's narrower Keeler gap. The entire ring system spans 40,800 miles (65,700 km), although this photo reveals only some of the outermost ring — Saturn is far above the top of the image.

This isn't the first time Cassini has paused to peer at Earth during its travels: In July 2013, it grabbed a panoramic view of Saturn and its rings that featured Mars, Venus and the Earth and moon as pinpricks (here's a closer view of the Earth and moon). A "Wave at Saturn" initiative encouraged people on Earth to wave toward the ringed planet at the right moment for the image — although of course the speck looked the same regardless. Another view of Earth from Cassini appears in this gallery of experts' favorite space photos.

As Cassini edges toward its Sept, 15 dive into the planet's atmosphere, it will build detailed maps of the planet's gravitational and magnetic fields to learn more about its composition, and will measure the material in the space between the planet's D ring and its atmosphere during the 22 dives — sending its final data about the majestic ring system.