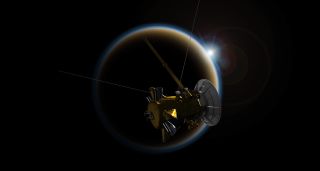 NASA's Cassini spacecraft will make its final close flyby of Saturn's moon Titan this weekend in preparation for the mission's "Grand Finale," when it dives down into the planet itself.

Cassini will reach its closest approach of 608 miles (979 kilometers) above Titan's surface on April 22 at 2:08 a.m. EDT (0608 GMT), according to a statement from NASA. During the encounter, Cassini's RADAR instrument will capture up-close observations of Titan's methane lakes and seas, as well as the moon's "magic islands" — mysterious features that scientists say may be caused by streams of bubbles.

This weekend's Titan flyby sets the stage for Cassini's Grand Finale on Sept. 15, when the spacecraft will intentionally dive into Saturn's atmosphere and end it's 13-year-long mission. But before Cassini takes its final plunge, the spacecraft has some more work to do at the ringed planet.

"During the close pass on April 21 [PDT, or April 22 EDT], Titan's gravity will bend Cassini's orbit around Saturn, shrinking it slightly, so that instead of passing just outside the rings, the spacecraft will begin its finale dives which pass just inside the rings," NASA officials said in the statement.

Over the next six months, Cassini will make 22 dives — one about every seven days — through the narrow space between Saturn and its rings, where the spacecraft's Ion and Neutral Mass Spectrometer (INMS) will observe the planet's ring particles and atmosphere, NASA officials said.

During the mission's final days, NASA scientists also plan to capture new observations of the bizarre hexagon-shaped vortex over the Saturn's north pole and study the planet's interior structure, according to a new video from NASA's Jet Propulsion Laboratory explaining Cassini's Grand Finale.