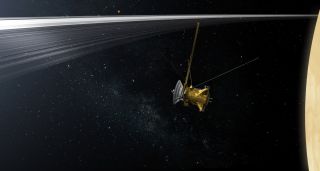 NASA's Cassini spacecraft will zip between Saturn and the planet's innermost set of rings repeatedly during the final phase of the probe's mission in 2016-2017.
(Image: © NASA/JPL-Caltech)

NASA has chosen a name for the dramatic final phase of its Saturn-studying Cassini mission, with a little help from the public.

Starting in late 2016, Cassini will zip between Saturn and its innermost ring a total of 22 times in a mission phase now known as the "Cassini Grand Finale," which will end in September 2017 when the probe intentionally dives into the gas giant's atmosphere.

The spacecraft's handlers had been calling this upcoming period "the proximal orbits" because Cassini will be so close to the planet, but they felt this apellation lacked pizzazz. So in April, they asked the public to vote for names provided by mission team members or suggest monikers of their own.

More than 2,000 people took part, NASA officials said. The team took the public's input into account, then decided to go with the "Cassini Grand Finale."

"We chose a name for this mission phase that would reflect the exciting journey ahead while acknowledging that it's a big finish for what has been a truly great show," Earl Maize, Cassini project manager at NASA's Jet Propulsion Laboratory in Pasadena, California, said in a statement.

Cassini launched toward Saturn in October 1997 and arrived in orbit around the ringed planet 10 years ago yesterday (June 30). The $3.2 billion mission — a collaboration involving NASA, the European Space Agency and the Italian Space Agency — also dropped a lander named Huygens onto Saturn's huge moon Titan in January 2005.

Cassini has made a number of important discoveries during its 10 years at Saturn. For example, the spacecraft detected plumes of water ice blasting from geysers at the south pole of the moon Enceladus, suggesting the Saturn satellite harbors an ocean of liquid water beneath its icy shell.

The Cassini Grand Finale should ensure the long-lived mission goes out with a bang, NASA officials say. During the 22 super-close orbits, the probe will map Saturn's gravity and magnetic fields in detail, assess how much material is in the planet's iconic rings and take up-close pictures of Saturn and the rings.

The mission team will ultimately steer Cassini into Saturn's atmosphere to ensure that the spacecraft doesn't crash into (and possibly contaminate) the moons Titan and Enceladus, which may host indigenous life of their own.