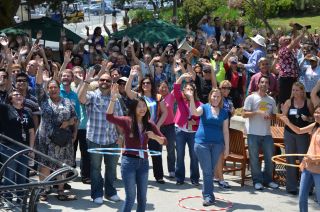 As NASA's Cassini spacecraft turned its imaging cameras to Earth, scientists, engineers and visitors at NASA's Jet Propulsion Laboratory, Pasadena, Calif., gathered to wave at our robotic photographer in the Saturn system on July 19, 2013.
(Image: © NASA/JPL-Caltech)

Earthlings en mass waved at Saturn on Friday (July 19) for a planetary portrait session being snapped by NASA's Cassini probe at the famed ringed planet.

To capture the new Earth view, the Cassini spacecraft took advantage of a rare total eclipse of the sun by Saturn to snap a photo of Earth nestled between the planet's rings. It was the first time that people on Earth knew ahead of time that their picture would be taken from space, organizers said. NASA and Cassini mission scientists encouraged everyone on the planet to go outside and wave between 5:27 and 5:42 p.m. EDT (2127 and 1242 GMT), when the photo would be snapped.

About 200 people waved from NASA's Jet Propulsion Laboratory in Pasadena, Calif., where the Cassini mission is managed. And space, comics and sci-fi buffs gathered in California for the annual San Diego Comic-Con International took a break from author signings and movie previews to go outside and wave at Saturn. [Wave at Saturn: Images from NASA's Cosmic Photo Bomb]

In New York City's Columbus Circle, a group organized by the Amateur Astronomers Association of New York gathered for a "flash mob" to wave at Saturn.

"We were being stared at by the skateboarders and the tourists, who were giving us a wide berth as we pointed up to the left of the CNN sign at Columbus Circle," organizer Jason Shilling Kendall told SPACE.com. "We chatted about the event of the picture-taking, and arrived before the images were taken, and stayed through the entire mission event, all 15-20 minutes of it."

The sweltering heat in the city did stifle attendance somewhat, however. "We did have about 50 or 60 people who declared that they would come, but 95 degrees is tough," Kendall said. "However, the relative shade of the Time Warner building and the breeze from the local Enceladus plumes (i.e. the Columbus statue fountains) kept us happy."

Other "Wave at Saturn" gatherings occurred at the Science Center of Iowa in Des Moines, and in the town of Kendal in England's Cumbria district, as well as Chicago, Los Angeles, and many other far-flung locales.

The official picture of Earth from Cassini should be released soon, along with a larger mosaic image of the Saturn system that Cassini is taking while in Saturn's shadow, officials said.