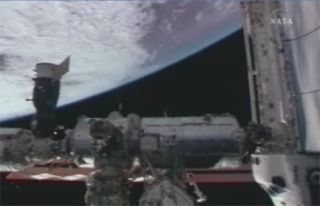 A camera mounted to the exterior of the International Space Station caught this view of the shuttle Atlantis docked during NASA's STS-117 mission in June 2007.
(Image: © NASA TV.)

HOUSTON --Seven NASA astronauts will bid farewell to the International Space Station(ISS) Tuesday when their shuttle Atlantis undocks after a busy constructionmission.

Atlantisand its STS-117 crew are due to depart the space station at 10:42 a.m. EDT(1442 GMT) after almost 10 days docked at the orbital laboratory.

?This hasbeen a great mission from a lot of perspectives,? Atlantis pilot LeeArchambault told Mission Control Monday. ?It?s been a challenging mission, buta successful one.?

Some ofthose unanticipated challenges included a major crash of Russian control andnavigation computer systems aboard the ISS last week, prompting severaldays of troubleshooting to fix. The planned 11-day mission was also extendedby two days to allow an extra spacewalk and the repair of a torn thermalblanket on Atlantis? left aft engine pod.

Atlantis isleaving one crewmember, U.S. astronaut Clayton Anderson, aboard the ISS as partof three-astronaut Expedition 15 crew. Anderson replaced fellow U.S. astronaut SunitaWilliams, who is returning to Earth aboard the shuttle after setting a recordfor the longestspaceflight by a female spaceflyer during her more than six months aboardthe orbital laboratory.

?I know you?llmiss her, she?s a joy to work with,? Sturckow said of Williams Monday. ?But it?stime for her to go back to planet Earth.?

BeforeAtlantis begins its trip back towards Earth, it will conduct a victory lap ofsorts around the ISS.

At theshuttle?s helm will be Archambault, who will take control of the 100-tonorbiter once it is about 400 feet (122 meters) away from the station and guideit completely around the ISS while his crewmates snap photographs from the rearwindows of Atlantis? flight deck.

PhilEngelauf, NASA?s STS-117 mission operations representative, said the fly-aroundwill allow the astronauts to survey their handiwork from afar. The photographs,he added, will be used by engineers to study the health and upgradedconfiguration of the station?s exterior with its new solar starboard solararrays.

Latertoday, once Atlantis has pulled away from the ISS, the shuttle crew will usethe orbiter?s robotic arm and 50-foot (15-meter) extension tipped with camerasto scan the spacecraft?s vital heat shield for damage by orbital debris ormicrometeorites.

Atlantisand its STS-117 crew are due to return to Earth on June 21, with landingtargeted for 1:54 p.m. EDT (1754 GMT) at NASA?s Kennedy Space Center in CapeCanaveral, Florida.