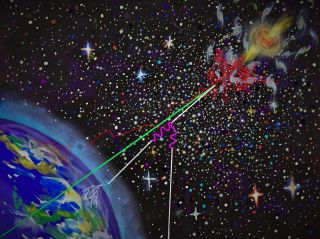 This artist's image reveals the "multimessenger" emission. As cosmic rays are accelerated by a supermassive black hole, the high-energy rays escaping are trapped in the environment around it. The high-energy neutrinos and gamma-rays are produced in the magnetized environment during their confinement and intergalactic space as they move through it. The three particles eventually reach Earth, where they can provide a unified picture.
(Image: © Kanoko Horio)

Supermassive black holes may provide the key to understanding some of the most energetic particles in the universe.

A new model suggests that ultra-high-energy cosmic rays accelerated by the jets of enormous black holes may give birth to high-energy neutrinos and high-energy gamma-rays. The model is the first of its kind based on detailed numerical computations and matches up with observations of each particle.

"The new model suggests that very high-energy neutrinos and high-energy gamma rays are naturally produced via particle collisions as daughter particles of cosmic rays, and thus can inherit the comparable energy budget of their parent particles," Kohta Murase, an assistant professor of physics, astronomy and astrophysics at Penn State, said in a statement. Intrigued by the similar power in each of the three particles, Murase and his colleague Ke Fang, a postdoctoral associate in astronomy at the University of Maryland, investigated the particles' origins and found the black-hole connection. [7 Surprising Universe Facts]

"[The model] demonstrates that the similar energetics of the three cosmic messengers may not be a mere coincidence," Murase said.

The origins of the universe's most energetic particles have been a long-standing mystery in astroparticle physics. Each particle is different, which may be why scientists have chased each one individually.

First discovered in 1912, cosmic rays blaze across the universe at the speed of light. Ultra-high-energy cosmic rays (UHECRs) are extremely energetic subatomic particles with energies beyond what can be produced by the world's most powerful particle accelerator, the Large Hadron Collider. The most powerful of these particles has the energy equivalent to a baseball thrown at 100 mph (160 km/h), according to Australia's Swinburne University. These extremely energetic subatomic particles are mostly protons, though some cosmic rays are made up heavier atomic nuclei.

Neutrinos are ghostly particles with minimal mass that usually pass through conventional matter, rarely interacting with it. They formed at the beginning of the universe, and continue to be produced by stars and nuclear reactions on Earth. But their high-energy counterparts are more than a million times more energetic. Both types have been detected at the IceCube neutrino observatory in Antarctica.

Previously, scientists had connected the particles in different ways. As cosmic rays interact with matter, they should produce gamma-rays; some have suggested that the same collisions should also produce neutrinos, according to the study.

Fang and Murase were intrigued when they noticed what they called "an intriguing coincidence". Although the energy levels of the three particles were dramatically different, their energy generation rates were comparable.

"Our model shows a way to understand why these three types of cosmic messenger particles have a surprisingly similar amount of power input in the universe," Murase said.

The results of their work were published online yesterday (Jan. 22) in the journal Nature Physics.

Are monster black holes the key?

The pair turned their attention to the leading suspects in the mystery of the highest-energy particles, active galactic nuclei (AGN). Most galaxies boast supermassive black holes at their centers. As material flows toward these giant black holes, they create a glowing core. Together, the two make up active galactic nuclei, and their bright glow allows astronomers to study them from across the universe. Some AGN also contain jets created by material diverted from the black hole at near light speed.

"In our model, cosmic rays accelerated by powerful jets of active galactic nuclei escape through the radio lobes that are often found at the end of the jets," Murase said. [The Strangest Black Holes in the Universe]

Next, the scientists computed how the cosmic rays moved and interacted with magnetic fields as they moved inside galaxy clusters and groups. By simulating how ultra-high-energy cosmic rays evolved as they moved through the universe, the new model explained the spectrum and composition observed so far, including previously unexplained phenomena discovered by ground-based telescopes. At the same time, the model explained the origin of the other two energetic particles, with most of the particles being generated by interactions between the high-energy cosmic rays colliding within the magnetized environment. Some are generated by the UHECRs as they travel through space.

"The very high-energy neutrino spectrum above one hundred million mega-electronvolts can be explained by particle collisions between cosmic rays and the gas in galaxy clusters and groups," Fang said in the same statement.

"Also, the associated gamma-ray emission coming from the galaxy clusters and intergalactic space matches the unexplained part of the diffuse high-energy gamma-ray background that is not associated with one particular type of active galactic nucleus," Fang said.

By tying all three particles together, the new model could help scientists better understand why they all produce similar energy leves.

"This model paves a way to further attempts to establish a grand-unified model of how all three of these cosmic messengers are physically connected to each other by the same class of astrophysical sources and the common mechanisms of high-energy neutrino and gamma-ray production," Murase said.

Other mysteries still need to be explained, such as some of the lower-energy neutrinos spotted by IceCube. That's why further investigations combining theory with data about all three of the most energetic particles are crucial in testing the model, according to Murase.

"The golden era of multimessenger particle astrophysics started very recently," Murase said. "Now, all information we can learn from all different types of cosmic messengers is important for revealing new knowledge about the physics of extreme-energy cosmic particles and a deeper understanding about our universe.

"However, there also are other possibilities, and several new mysteries need to be explained, including the neutrino data in the ten-million mega-electronvolt range recorded by the IceCube neutrino observatory in Antarctica," Murase added. "Therefore, further investigations based on multimessenger approaches — combining theory with all three messenger data — are crucial to test our model."