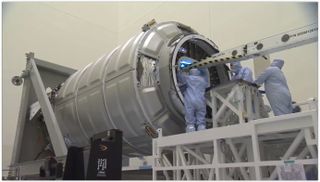 An Orbital ATK Cygnus spacecraft is loaded up with cargo in a clean room before launch. The Aerospace Corporation wants to find a way to make launches more efficient, fast and affordable for small-payload providers.
(Image: © NASA via YouTube)

Does the spaceflight industry need an agreed-upon unit of measurement for space-bound cargo? A nonprofit called The Aerospace Corporation thinks the answer is yes, and it's assembled a working group to come up with a standard "launch unit."

As technological advances make it possible to pack more satellite capabilities into increasingly smaller packages, the number of companies, universities and other institutions trying to send satellites into space is increasing. But most of those small payloads still have to hitch a ride with larger payloads. The Aerospace Corporation thinks organizing those "rideshares" based on a standard unit for payload size would make it easier to put more payloads into space, and make it possible to add small payloads to a launch on short notice.

"Developing a standard Launch Unit, or Launch-U, for mid-sized smallsats — approximately the size between a toaster and a small refrigerator — will enable rideshares to be configured more quickly and efficiently, resulting in more launch opportunities at a lower cost," Aerospace representatives said in a statement. "Aerospace [Corporation] is driving the Launch-U conversation by assembling representatives from industry, academia and government to set the mid-size smallsats standard." [In Photos: Tiny Satellites Launch from Space Station]

Hitching a ride to space

While there are a few companies trying to make small rockets that can make dedicated trips to space for small payloads, rocket ridesharing is likely to continue, experts say. Large rockets, like those produced by SpaceX and United Launch Alliance, can carry thousands to tens of thousands of pounds of cargo. That typically means they carry one large, primary payload, and then let customers with smaller payloads buy the remaining space.

"This has worked well, but it provides a very mission-unique solution," Carrie O'Quinn, a senior project engineer for The Aerospace Corporation, told Space.com in an email. The launch provider and the company (or group) providing the smaller payload work together to figure out how the smaller payload will fit on board and how it will be deployed or reach its destination, she said.

What if, instead, the small-satellite provider simply had to make sure its payload fit inside a box with a pre-established volume, similar to the way standardized shipping containers are used to send cargo across oceans? The launch provider could announce to the community that a spot — equal to a certain number of units — was open on the vehicle.

By eliminating the specialized pairing of small payloads and particular rocket launches, providers could also get small payloads aboard rocket launches on much shorter notice than what is currently possible, Aerospace representatives said. And, adding more customers to each launch could reduce the cost per customer.

There is already a standard unit for miniature satellites called cubesats: A 1U cubesat is 10 centimeters (about 4 inches) on each side. People wishing to send satellite technology or experiments to space can build those things into a satellite with the standard cubesat size (or whole multiples of that size); the 10x10x10 cm cubesats can then be packed together in a maximally efficient manner, as opposed to trying to pack together satellites of varying sizes and shapes.

"The CubeSat definition standardized the launch interface, and defining intermediate smallsat classes with Launch-U could have a similar revolutionary impact on the space industry," company representatives said in the statement. The creation of the Launch-U working group began with a "hack session" involving a group of people discussing ways to tackle difficult problems in the spaceflight industry. "The premise for the Launch U was: 'Why can't I get a slot and launch tomorrow?'" Randy Villahermosa, executive director of innovation at The Aerospace Corporation, said in an email. "During the Hack Session, we learned that the CubeSat 1U form factor was not ideal for launch vehicles. That led to the concept of creating a comparable unit for launch."

The Aerospace Corporation has established a working group that consists of "representatives from industry, academia and government," according to the statement. Villahermosa said the group has "pulled together inputs from across the industry (launch vehicle providers, satellite developers, integrators and aggregators, as well as government and academia) to develop a rough draft of the standard.

"We have an aggressive timeline that we're hoping to have a draft to industry in the spring for comments," he continued. "Ideally, we'd like to present the results at next August's 2018 SmallSat conference."

Representatives from The Aerospace Corporation said they've received a positive response from the small-satellite community, but for the Launch-U initiative to work, large-scale launch providers will also have to participate.

Eric Stallmer is president of the Commercial Spaceflight Federation (CSF), a member organization that represents more than 70 spaceflight companies. Part of CSF's mission is to "[lay] the foundation for a sustainable space economy and [democratize] access to space for scientists, students, civilians, and businesses."

After talking with some CSF members about the proposal, Stallmer said he thinks there "generally seems to be support for it" and that those members appreciate that Aerospace has brought in representatives from all sides of the launch industry into its working group.

At the same time, Stallmer said he doesn't think large launch providers were necessarily seeking this type of standardization for small to midsize payloads; the need for this standardization lies mostly with the small-payload providers. But the general trend of shrinking satellites means there's a business incentive for launch providers to pay attention to the proposal now that it's been brought to their attention, he said.

"I think it's a good, innovative look at how to make the launching aspect of things or the payload a little more efficient," Stallmer said. "We're always intrigued by that."