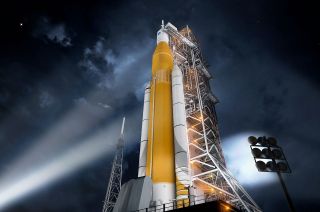 The United States could lose its long-held leadership position in space science, technology and exploration if the country doesn't renew its commitment to those fields soon, a coalition of space-industry organizations has warned.

Such a commitment should include the completion of a crewed launch system, stable NASA budgets and continued partnerships with other nations on projects such as the International Space Station, said the 12-group coalition, which jointly presented a white paper at the National Press Club on Friday (March 4).

"What we have is a rather unprecedented consensus of the space community in the United States," said Elliot Pulham, CEO of the nonprofit Space Foundation and one of three experts who shared their thoughts with reporters at the document's unveiling. [Giant Leaps: Top Milestones in Human Spaceflight]

Pulham added that one of the board members of the Space Foundation, journalist and writer P.J. O'Rourke, would have kept the message quite short if he had attended the event: "He would have said it should be one sentence: 'Space is good — keep investing.'"

The group plans to send the white paper, which is called "Ensuring U.S. Leadership in Space," to candidates for office, from the presidential race on down to local congressional campaigns.

The main problem, the report said, is that NASA's funding is decided at the whim of politics. And at the moment, NASA's budget is at a historic low as a share of the overall federal budget. Meanwhile, other countries, such as China, are ramping up their investments in space.

Eric Stallmer, president of the nonprofit Commercial Spaceflight Federation, said that politicians often regard space as a regional issue, one that affects jobs in Florida, Texas and other states. But that's a very limited, and limiting, view, he added.

Another big threat to U.S. leadership in space is malaise, brought on partially by past successes, several experts said.

"We landed on the moon, and that cemented in our heads that we were leaders," said Sandra Magnus, executive director of the American Institute of Aeronautics and Astronautics. Doing a great thing once, she added, doesn't guarantee leadership forever. [NASA's 17 Apollo Moon Missions in Pictures]

"Conquering malaise means allowing ourselves to be led by optimists and visionaries," Pulham said. Making this happen could boost the nation's "soft power," creating an environment in which other countries want to work with the United States, he added.

One of NASA's purposes is to "expand the bubble" of knowledge, Magnus said. Since the agency's establishment in 1958, NASA has built a base of expertise that has led to increased accessibility to space, Magnus said, citing the recent phenomenon of student groups launching cubesats as an example.

"For 50 years, we were kind of caught in low-Earth orbit, but now the edge of the bubble is expanding," she said. "Now people are engaged behind that in ways that aren't necessarily tied to government funding."

Investing in space allows new industries to develop, and that requires a commitment that is often lacking these days, Stallmer said. The coalition said it hopes Congress and the next president — whomever that might be — will commit to a plan of action, and fund the agency accordingly.

An important investment, the panel said, is a launch system able to get American astronauts into space, a capability the nation lost when the space shuttle program was grounded in 2011. (Right now, Russia and China are the only countries that can launch astronauts to space.)

NASA is currently developing the Space Launch System (SLS) megarocket and Orion capsule toward this end, and the coalition urged continued support of these efforts. SLS and Orion are designed to help get astronauts to deep-space destinations such as Mars. Meanwhile, SpaceX and Boeing have signed NASA deals to develop "astronaut taxis" that will get spaceflyers to Earth orbit and back, beginning in 2017.

During Friday's event, panelists were asked whether fully funding SLS — which is scheduled to fly for the first time in 2018 — might actually hamper American leadership in space, since the program might not even survive into the next administration. And private companies — notably SpaceX, which is building a rocket called the Falcon Heavy — might soon be able to lift hefty payloads into space for less money.

But Magnus said developing SLS technology is still important. "That system [SLS] is the expansion of the bubble," she said. "You need to continue to push the boundaries of what you're doing. You need to bring the technologies to bear that can push us out further."

And SLS and other NASA technology will still transfer to industry at some point, she added.

The panel also stressed that the U.S. should continue to partner with other nations in ways that benefit the America's space industry and security.

Lowering trade barriers in some areas could help make this happen, Pulham said, noting that restricting sales of certain equipment overseas simply encouraged other countries to develop their own capability to launch rockets.

"Our allies could not buy from us, so instead [they] developed their own indigenous industries," he said. "There was a time when 75 percent of launch capability was built in Colorado. Now it's zero percent."

Pulham also noted that some advanced spacecraft parts are now being built by other nations. "Other people have technology that we should want to get our hands on as well," he said.

Some barriers need to be in place to address real security concerns, Pulham said. "But they should not be so high that we can't do common-sense work together."

You can read "Ensuring U.S. Leadership in Space" for free here: http://www.spacefoundation.org/sites/default/files/downloads/Ensuring_US_Leadership_in_Space.pdf