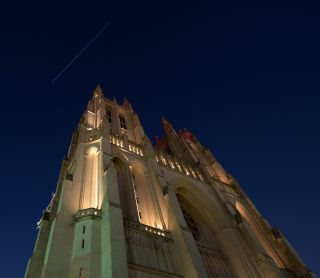 A stunning new photo shows the third-brightest object in the sky zooming over Washington National Cathedral.

That object, the International Space Station (ISS), appears as a bright streak in the image, a 20-second exposure captured Wednesday (Nov. 29) in the nation's capital by NASA photographer Bill Ingalls.

You may not have the gear or the expertise to snap a shot like this, but you can see the ISS, given clear and relatively dark skies. The $100 billion orbiting lab is visible to the naked eye and best viewed around dawn and dusk, according to NASA officials. To learn when to look up in your area, check out the agency's Spot the Station site.

The ISS — which barrels around Earth every 90 minutes, at about 17,500 mph (28,000 km/h) — has been continuously occupied by rotating crews since November 2000. Six spaceflyers currently live aboard the station: NASA astronauts Joe Acaba, Randy Bresnik and Mark Vande Hei; cosmonauts Alexander Misurkin and Sergey Ryazanskiy; and the European Space Agency's Paolo Nespoli, who hails from Italy.

And in case you were wondering, the two brightest objects in the sky are the sun and moon. Venus and Jupiter round out the top five.

Editor's note: If you capture an amazing photo of the ISS or any other night-sky view that you'd like to share with Space.com for a possible story or gallery, send images and comments to: spacephotos@space.com.