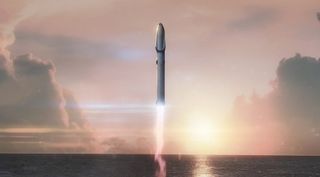 SpaceX is developing its BFR reusable rocket and BFS reusable spacecraft, for which the company expects to receive some financial support from U.S. government agencies like the Air Force.
(Image: © SpaceX)

LUXEMBOURG CITY — The president of SpaceX said she expects the company would receive additional funding from the U.S. government to support the development of its large reusable launch system.

Speaking at the NewSpace Europe conference here Nov. 16, Gwynne Shotwell noted that SpaceX is already receiving funding from the U.S. Air Force supporting the development of Raptor, the engine that will power the vehicle known as BFR, or Big Falcon Rocket, and the reusable spacecraft known as BFS or Big Falcon Spaceship.

"I do anticipate that there is residual capability of that system that the government will be interested in," she said. "I do see that we would likely get some funding from the government for BFR and BFS." She added, though, that work on the vehicles was not contingent on receiving government funding.[The BFR: SpaceX's Mars-Colonization Architecture in Images]

One avenue for doing so would be through the U.S. Air Force's Launch Services Agreement competition, which plans to provide several awards to companies to help fund development of prototype launch systems, though initial test flights, to end U.S. reliance on the Atlas 5 and its Russian-manufactured RD-180 engine. Proposals for the competition were due to the Air Force Nov. 20.

Shotwell said after the talk that BFR could be used to launch some of the heaviest national security payloads envisioned by the Air Force in the 2020s. Most of those payloads, she said, can be served by the existing Falcon 9 and the Falcon Heavy, whose first launch is scheduled for late this year.

The Air Force gave SpaceX an award last year through a cost-sharing arrangement known as Other Transaction Agreements to support Raptor development. The original Air Force contribution was $33.6 million, and last month the service added $40.7 million to the agreement for additional work.

Shotwell said that the benefits of such public-private partnerships were demonstrated by NASA's Commercial Orbital Transportation Services (COTS) program, which provided funded Space Act Agreements to Orbital ATK and SpaceX to develop commercial cargo transportation systems. For SpaceX, that led to the development of the Dragon spacecraft and Falcon 9 rocket that she described as the "workhorses" of the company today.

"I've been in this business for almost 30 years," she said. "That $406 million [in NASA COTS funding] had to be some of the best investment money that NASA and the U.S. government have spent. They got quite a bit out of that."

SpaceX has also partnered with NASA on the development of a commercial crew system. Shotwell said she believed the company would be able to complete both an uncrewed and crewed test flight of its Crew Dragon, or Dragon 2, spacecraft to the International Space Station in 2018.

Shotwell, though, had no updated on a related commercial human spaceflight effort. In February, SpaceX announced that it planned to send two paying customers on a circumlunar mission on a Crew Dragon, launched on a Falcon Heavy, in late 2018. The company has provided no updates on the status of that project since the announcement.

"I don't have any updates on that," she said, but added there was more interest in such a flight than she expected. "The most surprising thing about that is that there are as many people as there are who want to go do that, and can seemingly afford to do that."

She said later that she expected the BFR system be used for lunar landing missions, likely before missions to Mars that have been the driving goal of SpaceX founder Elon Musk. "It appears to be a thrust of the current administration to go to the moon first, and we're hoping that thrust is to develop a permanent presence on the moon," she said. "And then from there we're headed to Mars."