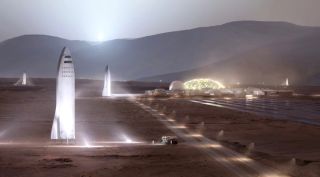 You don't have to lie when talking to your kids about SpaceX's BFR Mars-colonization architecture.

Yes, BFR stands for "Big F---ing Rocket." But there's also a family-friendly variant of the acronym, and it's coming into wider and wider use — as evidenced by SpaceX President Gwynne Shotwell's remarks Thursday (Oct. 5) at the first meeting of the newly resurrected National Space Council.

The BFR transportation system consists of a giant, 31-engine rocket topped by a spaceship capable of carrying 100 people or more. Both of these vehicles will be fully and rapidly reusable, helping to make Mars colonization economically feasible, Musk said during his IAC talk.

SpaceX has already started serious development work on the BFR, and the company aims to launch the first uncrewed Mars missions with it in 2022, Musk said. If everything goes well, crewed BFR flights to the Red Planet could follow in 2024, he added.

Musk first revealed the basics of SpaceX's Mars-settlement architecture at the 2016 IAC meeting, which was held in Guadalajara, Mexico. During that presentation, the billionaire entrepreneur called the rocket-spaceship combo the Interplanetary Transport System.

With the shift to BFR, SpaceX appears to be going back to the system's nomenclatural roots; the term has been in use internally at the company for several years, as a December 2015 GQ story makes clear.

"This is a very obtuse video-game reference," Musk told GQ. "In the original Doom, the gun that was like the crazy gun was the BFG 9000 or something like that. So it was sort of named after the gun in Doom. But that's not its official name, of course."

This anecdote suggests that "Big F---ing Rocket" was the original phrase for the BFR acronym. But "Big Falcon Rocket" isn't exactly an awkward fit: The big booster slots nicely into SpaceX's Falcon family, which also includes the company's first orbital rocket, the now-retired Falcon 1; the workhorse Falcon 9; and the Falcon Heavy, whose maiden flight is scheduled to take place next month.