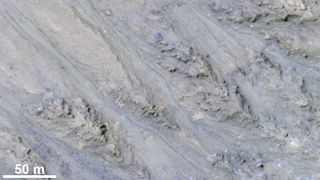 This inner slope of a crater on southern Mars has several of the seasonal dark streaks called "recurrent slope lineae," or RSL.
(Image: © NASA/JPL-Caltech/UA/USGS)

Bad news for microbes that want to make a home on Mars: A new study argues that dark streaks on the Martian surface are not caused by underground supplies of liquid water.

In 2015, observations by NASA's Mars Reconnaissance Orbiter revealed trace amounts of water (mixed with heavy doses of salts) on the Red Planet's surface. These "hydrated salts" corresponded with dark streaks on Martian hillsides called recurring slope lineae (RSL), which researchers had already identified as possible sites of liquid water rising to the surface.

Studies of RSL, and in particular the findings by the MRO, introduced the tantalizing possibility that there could be enough liquid water on the surface of Mars today to support microbial life. [Photos: The Search for Water on Mars]

But the new study shows that those dark RSL could simply be flows of sand and other granular material, according to a statement from NASA. In addition, the authors provide more reasons why the liquid water explanation does not fit with certain features of RSL.

"We've thought of RSL as possible liquid water flows, but the slopes are more like what we expect for dry sand," Colin Dundas, a research geologist with the U.S. Geological Survey's Astrogeology Science Center and a lead author on the new study, said in the statement. "This new understanding of RSL supports other evidence that shows that Mars today is very dry."

However, neither study can fully explain all the features of the Martian RSL, and the authors of the new paper admit the mystery may not be solved until a rover or a human expedition can explore those regions directly.

Thousands of RSL sites have been identified on Martian slopes surface, in about 50 hilly regions spread out between the north and south midlatitudes, according to the statement from NASA. The streaks appear during warm seasons and shrink or disappear during winter. Similar features on Earth are only caused by "seeping water," officials said in the statement, but "how they form in the dry Martian environment remains unclear."

The new study offers an alternative explanation to flowing water.

When sand and other granular materials are lumped into piles, the material locks into place until the pile reaches a certain height. At that point, some of the grains begin to slip and flow smoothly down the sides, forming rivulets. Those rivers of material could appear darker than the material around them, according to the statement, and thus could explain the RSL.

And there's another key piece of evidence that the authors point to in support of this hypothesis: For a given type of granular material (such as sand), there is a specific angle at which those rivulets can form, and it's known as the "angle of repose." The authors show that the RSL that have been observed so far only appear on hillsides that reach the angle of repose for sand dunes. If the RSL sites were created by water, the authors postulate that these features should also appear on gentler slopes.

"The RSL don't flow onto shallower slopes, and the lengths of these are so closely correlated with the dynamic angle of repose, it can't be a coincidence," Alfred McEwen, a professor of planetary geology at the University of Arizona, Tucson, said in the statement. McEwen is the HiRISE Principal Investigator and a co-author of the new report.

A home for life

The findings do not negate the detection of hydrated salts by MRO, and liquid water may still play a role in the formation and seasonal evolution of RSL streaks, according to the paper. But, similar to a 2016 study, they contend the hypothesis that the water comes from beneath the surface.

The authors propose that the water detected in the RSL is sucked from the thin Martian atmosphere, rather than supplied by underground reserves. The increase in hydration could cause changes in the granular material on these slopes that triggers some of the flow that creates the dark streaks. The dark regions could also be the result of "changes in hydration," according to the statement.

"Full understanding of RSL is likely to depend upon on-site investigation of these features," said MRO Project Scientist Rich Zurek. He noted, however, that if scientists could visit these RSL sites, they would still take precautions to prevent accidental contamination of the sites with Earth-based microbes. In other words, scientists will not completely rule out the possibility that microbes could be living in these RSL just yet.

Zurek added that "a full explanation of how these enigmatic features darken and fade still eludes us. Remote sensing at different times of day could provide important clues."

The study was published today (Nov. 20) in the journal Nature Geoscience.