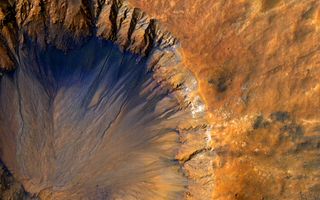 Dark, narrow, 100-meter-long streaks can be found in various locations across Mars and appear to be active only when exposed to direct sunlight.
(Image: © NASA/JPL-Caltech/University of Arizona)

Dark streaks on the surface of Mars may indicate that liquid water flows there today. A new study has revealed more detail about the changes these briny trails are causing on the Martian surface.

The dark, narrow streaks, called recurring slope lineae (RSL), appear and disappear seasonally. The new study shows that the streaks can leave behind veritable footprints — such as long-lasting changes in the color of the soil, or divots and bumps.

The location of RSL sites suggests that they are probably not caused by underground water flowing to the surface, or via seasonal melting of shallow ground ice, NASA said in a news release. Instead, the results of the new study favor the theory that water in RSL must be pulled directly from the atmosphere. [Flowing Water on Mars: The Discovery in Pictures]

Thousands of RSL can be found scattered across Mars, on relatively warm surfaces of canyon ridges and isolated peaks in equatorial and middle latitudes. First detected in 2011, some RSL reach up to a few hundred meters in length. In September 2015, scientists announced that the mysterious streaks consist of flowing, salty water.

Recurring slope lineae are characteristically darker than their surroundings, recurring on slope faces that receive some sunlight, and fading during the "winter," when the temperature drops.

"Because [RSL] are not active during the coldest part of the year, it suggests they have something to do with a liquid," said Matthew Chojnacki, associate staff scientist at the University of Arizona's Lunar and Planetary Laboratory, told Space.com.

In the new study, researchers used HiRISE images to identify 41 RSL sites in central and eastern rifts of the Valles Marineris canyon system (which Chojnacki said is possibly the largest canyon system in the solar system).

"We have a lot of data from this giant canyon system — which would stretch from New York to California," he said. The new study suggests that "possibly 50 percent of all RSL sites" are located in Valles Marineris, Chojnacki said.

With the possibility of flowing water on Mars comes increasing speculation that life could indeed exist on the Red Planet.

"What we understand is, the saltier water gets, the more difficult it gets for life to take hold," Chojnacki said. "So the question is, if you had this briny liquid and some sort of catalyst, would you be able to start life right there? Or, if you had ancient life that took hold on fresh water as part of Mars' watery past, could that then adapt to the remaining saltier varieties of liquid water? It's tough to say, but scientists are currently exploring those questions."

Previously, water ice was found close to the Martian surface at middle and high latitudes, so the new findings in Valles Marineris suggest access to water is possible at lower levels, too, NASA said in the release. Water-budget estimates made of the canyon system suggest there are several Olympic-size swimming pools worth of water underlying the region.

However, researchers have yet to determine where the water found in the RSL sites is coming from. According to Chojnacki and a statement from NASA, scientists have determined that subsurface ice wouldnꞋt be able to refill the RSL fast enough to account for their seasonal changes, and groundwater wouldn't be able to reach some of the peaks where the RSL are found. Chojnacki said the study favors a process known as atmospheric deliquescence, whereby water vapor is directly pulled from the atmosphere.

The new study also identified static, bright streaks that are thought to be remnants of old RSL. They are visible year-round, as well as many years after presumably drying out. Researchers speculate that these brighter streaks may reveal some sort of surface change. For example, after old RSL have run their course and dried up, the trail they left behind may be an indication of change in particle size or salt deposition, Chojnacki told Space.com.

These brighter streaks are the same size as the darker streaks, can be found in the same areas, and, in some locations, overlap with the dark streaks.

"In a few cases, we've actually seen dark streaks form and grow to the point that we can confirm them as RSL, and then the next [warm] season we see them as those bright streaks left over," Chojnacki said. "That would indicate that there is some change to the surface that is more longstanding than just the darkness that would otherwise fade to the tone of the surrounding surfaces. So, you can think of these bright streaks as stains to the sandy surface."

HiRISE images also revealed topographic changes, such as slumps, divots and sediment moving downslope, which appear to be associated with seasonal RSL activity.

"RSL are generally superficial — a change in the tone or darkness of the surface – but before now, we hadn't seen physical changes to the surface," Chojnacki said. "Now, we see material [sediment] downslope that wasn't there before."

Chojnacki said the finding suggests that RSL are not just temporary marks on the Martian surface, but that they are potentially "modifying slopes and contributing to landscape evolution."