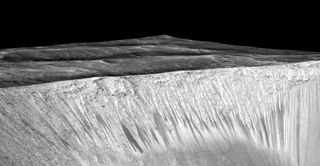 Mars' intriguing dark streaks may not be evidence of liquid water after all.

These long and narrow features, known as recurring slope lineae (RSL), darken some slopes near the Martian equator for weeks at a time during the warmest parts of the year. They were discovered in 2011, by scientists studying images captured by NASA's Mars Reconnaissance Orbiter (MRO).

Some researchers posit that RSL are caused by transient flows of briny water, and therefore may be signs of a potentially habitable environment — an idea that was bolstered in 2015, when scientists announced that MRO had identified hydrated salts in the features. [Liquid Water on Mars: The Discovery in Pictures]

But liquid water isn't the only possible explanation. For example, some researchers have suggested that RSL are caused by seasonal carbon-dioxide frost, while others argue that they're avalanches of bone-dry dirt and sand.

A new study, which was published Monday (March 20) in the journal Nature Geoscience, makes the case for this last hypothesis. A team of researchers, led by Frédéric Schmidt of Paris-Sud University in France, modeled RSL flows using numerical simulations. This modeling work indicates that sunlight alone can trigger landslides on RSL slopes, via a "thermal creep" effect, study team members said.

"Due to solar insolation, there is a temperature rise in the soil, and thus the air is moving in the porous space of the soil that in turn destabilize[s] the grains," Schmidt told Space.com via email. "This effect is enhanced when there is a shadow of a boulder. So the source seems to be boulders!"

Indeed, the team's models suggest that nearby boulders are necessary to trigger RSL flows, the researchers wrote in the new study.

The simulated flows matched up well with actual RSL observed at Mars' Garni Crater, capturing the features' seasonality and their prevalence on certain types of slopes, team members said. For example, Garni Crater streaks are more common on west-facing slopes than east-facing ones, because the former absorb more solar energy, the researchers wrote.

The predictive success of the "thermal creep" model isn't the only piece of evidence pointing to dry avalanches as the cause of RSL, according to Schmidt and his colleagues. For one thing, the potential source of RSL water remains a mystery. Condensation of atmospheric water at the Martian equator — the driest part of the planet — is unlikely, the researchers said, and buried water-ice isn't stable in RSL locales. In addition, subsurface aquifers can't explain RSL near crater rims, they added.

Furthermore, RSL streaks are narrow and straight, like dry-rock avalanche flows here on Earth, the researchers said. (Water flows typically feature "levees" of material along their sides and at their ends, they added.)

The dark color of RSL does not necessarily indicate wetness, either, team members said.

"We interpret the relative darker albedo appearance of the RSL as an effect of the sorting of the grains during the flow," they wrote in the study. "Finer grains could also be ejected during the flow. The fading is then due to the finer aeolian [wind] grain deposition from the atmosphere."

Even the hydrated salts may not be slam-dunk evidence of liquid water. Lab experiments performed recently by a different research team suggest that the water in RSL salts may come from the Martian atmosphere rather than the surface or near-surface.

So researchers have some more work to do before a definitive RSL answer emerges. More lab experiments and data gathered at Mars could help clear things up relatively soon, Schmidt said.

"In addition to experimental data, orbiter data should determine the time of the day when the process is active," he told Space.com. "This could discriminate between dry (more in the afternoon) and wet (more in the morning case). This should be done in the near future by ExoMars from the European Space Agency."