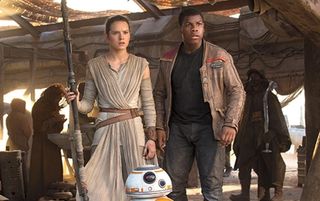 "Star Wars: Episode IX" will mark the end of the current trilogy - but it won't be the last we'll see of its young heroes, Rey and Finn, or their companions Poe Dameron and BB-8.

"We're sitting down now, we're talking about the next 10 years of Star Wars stories, and we're looking at, narratively, where that might go," Lucasfilm president Kathleen Kennedy told The Star Wars Show. "Future stories beyond Episode IX with these new characters: Rey, Poe, Finn, BB-8 — but we're also looking at working with people who are interested in coming into the Star Wars world and taking us places we haven't been yet. That's exciting too, because it's a vast galaxy far, far away."

This is not particularly surprising; the characters of both the original and prequel trilogies have continued to appear in various media and stories in the years since the release of those films. Rey and Finn will next appear in "Star Wars: The Last Jedi," which hits theaters Dec. 15.