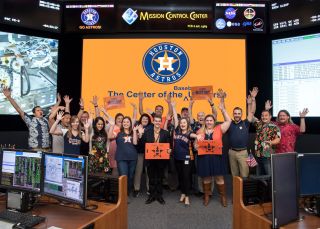 Ellen Ochoa's gloating was quite restrained, considering the circumstances.

Last week, Ochoa and Mike Watkins — the directors of NASA's Johnson Space Center (JSC) in Houston and the agency's Jet Propulsion Laboratory (JPL) in Pasadena, California, respectively — placed a little wager on the World Series. If Ochoa's Houston Astros beat Watkins' Los Angeles Dodgers, the latter would have to wear an orange Astros jersey for a day. And if things went the other way, Ochoa would have to don Dodger blue.

Well, last night (Nov. 2), the Astros beat L.A. 5-1 in the decisive Game 7, capping one of the wildest World Series in recent memory. (Two of the seven games went into extra innings, and the two teams combined to hit 25 total home runs, a World Series record.)

Shortly after the final out was recorded last night, Ochoa called out Watkins in a friendly manner.

"Can't wait to see @NASAJPL director Mike Watkins in @astros orange!! #OutOfThisWorldSeries," Ochoa said via Twitter, where she tweets as @Astro_Ellen. (The handle is presumably a reference not to the Houston ballclub but to Ochoa's spaceflight career; she's a former NASA astronaut who flew four space shuttle missions between 1993 and 2002.)

At about the same time, JSC's official Twitter account, @NASA_Johnson, issued a celebratory tweet: "Congrats to our hometown team, the #HoustonAstros, on an incredible #WorldSeries victory! Way to shoot for the stars and #EarnHistory!"

The response from JPL's official Twitter account, @NASA_JPL, suggests that folks at the Southern California facility aren't taking the loss too hard: "Well done, @NASA_Johnson. You bested us in the #OutOfThisWorldSeries today. We're proud to work with you exploring the world of tomorrow."

There's a bit of irony in the current rooting interests of the two center directors: Ochoa is from Southern California, and Watkins is an alumnus of the University of Texas at Austin.

JSC is NASA's human-spaceflight hub and the home of its astronaut corps. JPL is the agency's lead center for robotic planetary exploration.