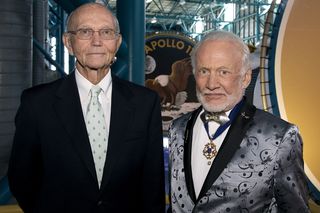 Apollo 11 crewmates Michael Collins and Buzz Aldrin came together during a gala on July 15, 2017, to celebrate the 48th anniversary of the historic mission, which touched down on the lunar surface on July 20, 1969.
(Image: © Cat Vinton)

To celebrate their love of reading, moonwalker Buzz Aldrin and space tourist Anousheh Ansari join dozens of other space celebrities in a book being published for a children's charity.

The anthology is called "The World is Just a Book Away" (USC Libraries Press, 2017), and it is the culmination of 15 years of work by James Owens, a University of Southern California management communication professor who organized the book to celebrate reading, a skill his mother fostered in him before she died when he was 9.

While the book includes a range of notable people — such as His Holiness the Dalai Lama, former Soviet Union President Mikhail Gorbachev and famed director Martin Scorsese — many of the people featured have personal or political connections to space as well. [Best Space Books and Sci-Fi: A Space.com Reading List]

Among them is Buzz Aldrin, who was the second man to walk on the moon in 1969 during Apollo 11. Although he left NASA shortly afterward, Aldrin has remained an advocate for space exploration, and to this day, he still does public-relations work for the agency.

"Throughout the years, I have been marked by the words and books of many great authors," Aldrin said in an excerpt provided to Space.com.

"I find that words are magical in their ability to capture emotion and convey information," he added. "Perhaps that is why I have always been intrigued by the spoken word and the written word."

Anousheh Ansari, whose family is the title sponsor of the Ansari X Prize that helped SpaceShipOne fly into space, also became the first Iranian-American in space, in September 2006. Ansari is an engineer and a co-founder of Prodea Systems, a provider of technology for digital homes.

"I would live through the lives of heroes and heroines such as Florence Nightingale and Marie Curie in books, and dream of visiting far-off places — even the stars," Ansari said in an excerpt.

Politicians Bill Richardson (the former governor of New Mexico who helped build Spaceport America) and Ted Kennedy (the late brother of former president John F. Kennedy, who helped spur the Apollo moon program in the 1960s) talked about John F. Kennedy's 1956 book "Profiles In Courage" as being influential in their lives.

"I reread the final sentences of his book, and I am reminded of him and his challenge to strive for the quality he admired most — courage," Ted Kennedy said of his brother in an excerpt provided by the charityto Space.com.

The book will be released Nov. 9, and you can preorder it on Amazon.com. Profits from the book sales will go toward an affiliated charity, also called The World Is Just A Book Away, which has helped more than 70,000 children in 90 libraries worldwide.