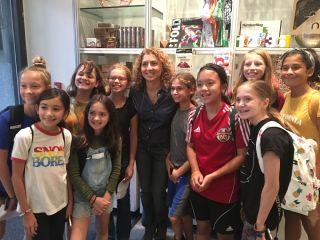 NEW YORK — At the National Museum of Mathematics here Thursday (Oct. 5), U.S. entrepreneur Anousheh Ansari wowed the crowd with tales of her 10 days aboard the International Space Station in 2006 as the first civilian woman to fly to space.

After months of training with astronauts as backup for Japanese businessman Daisuke Enomoto, who was supposed to be the world's fourth "space tourist," Ansari was called to fill in three weeks before Enomoto was supposed to launch. The businessman was disqualified from flying due to a health concern, and Ansari would take his spot aboard the Soyuz TMA-9 capsule. In September of 2006, she officially became the first woman unaffiliated with any space agency to fly to space.

But Ansari's journey to space began long before that launch. [World's First Space Tourists Reflect on Dawn of Private Spaceflight]

Ansari was born in Iran, and she spent her childhood dreaming of the stars. When she was a young girl, she drew a picture of a rocket ship and told everyone that one day, she would board a rocket just like it and fly into space, she said at the event. Because she was not only a girl but also living in a country that didn't even have a space program — the Iranian Space Agency wasn't established until 2004 — no one truly believed she'd do it, she explained.

So she set out to prove them wrong, and that's exactly what she did. Two years before she rocketed to space, Ansari and her family — who own and operate tech company Prodea Systems — awarded $10 million to the first winner of the Ansari X Prize for successfully sending an individual spacecraft into suborbital space twice within five days. The experiment was an early indication that private spaceflight would be possible.

Ansari would have given anything to have been in that rocket as it left Earth's bounds, she said in a video she shared at the event Thursday. Two years later, she was climbing aboard the International Space Station alongside Russian cosmonaut Mikhail Tyurin and NASA astronaut Michael Lopez-Alegria.

As anyone dreaming of her day in space would likely do, Ansari immediately disobeyed instructions to take the first day in space easy and flipped herself around so much that she "got very, very sick," and had to take a sedative that made her drowsy for the rest of the day, she told the audience. If the video she showed is any indication, though, the excitement didn't disappear after the sedative wore off.

Ansari spent the next 10 days floating M&M's into her mouth, doing experiments with the astronauts and watching night turn to day down on Earth. Some of her favorite moments aboard the space station, she told Space.com, were mealtimes with the astronauts who would tell stories about their experiences in space.

All of the astronauts she encountered talked about the first moment they saw Earth from space, and recognized that the planet we call home is just a small speck in the universe. "I wish everyone could experience that," Ansari said at the event. She believes having that moment of clarity makes all of our problems and disagreements seem unimportant.

"The experience really helps you see the world differently, and you re-prioritize what is important to you," Ansari told Space.com. "Your relationship with everyone and everything around you changes, and you have less stress over mundane things."

Of course, not everyone has had that experience, and many people here on Earth still don't see the world as one cohesive whole but rather in divisions like race, gender and nationality — divisions that still keep young women like Ansari once was out of science, technology, engineering and math (STEM) fields. But Ansari wants to change that, which is one of the reasons she was speaking that night.

Young girls were scattered throughout the audience at the Museum of Math event, looking up at a woman who had a passion for space, worked hard and eventually realized her dream. She is showing them that they, too, could go to space one day. And that, to Ansari, is just as exciting as the moment she broke through Earth's atmosphere.