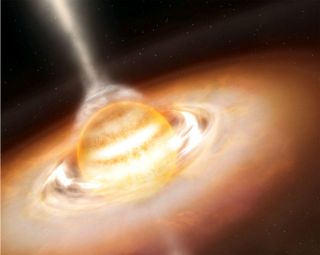 Using ESO's VLT, astronomers found jets coming out from a 24 Jupiter-mass brown dwarf, showing that outflows are rather ubiquituous in the Universe and leading to the prospect that that young giant planets could also be associated with outflows.
(Image: © ESO)

A “failed star” with only 24 times the mass of Jupiter is the smallest known object to spout jets of matter from its poles, a phenomenon typically associated with much larger black holes and young stars.

The new finding, detailed in the current issue of Astrophysical Journal, confirms that a wide range of celestial objects is capable of generating such outflows.

“There are black holes that are 3 million solar masses spewing jets, and there’s this thing, which is 2 percent of a solar mass, doing the same thing,” said study team member Ray Jayawardhana of the University of Toronto.

The discovery also raises the possibility that large gas giant planets like Jupiter or Saturn might also have been gushers some time early in their history.

The new jet-spewing object is a previously identified brown dwarf—celestial objects with masses between 13 and 75 times that of the Jupiter, too massive to be a planet but too small to sustain the internal nuclear fires needed to become stars. For this reason, brown dwarfs are sometimes called failed stars.

Called 2M1207a, the spurting brown dwarf is ringed by gas and dust, similar to the protoplanetary disks from which planets form around young stars. Indeed, 2M1207a is known to harbor a 5-Jupiter-mass planetary companion. Called 2M1207b, the gas giant was one of the first planets outside of our solar system to have its picture taken directly.

2M1207a’s streaming jets were discovered using the European Southern Observatory’s Very Large Telescope (VLT). The jets extend about 620 million miles (1 billion km) into space and are speeding away from the brown dwarf at a few kilometers per second.

“Preliminary results suggest that a brown-dwarf jet is just scaled down from what we see in a low mass star,” said study leader Emma Whelan of the Dublin Institute for Advanced Physics in Ireland.

In 2005, Whelan’s team discovered the first jet-spewing brown dwarf, but that one was about 60 Jupiter masses.

Scientists are still not sure of the role jets play in star formation. One idea is that by ejecting large amounts of material into space, the jets help determine the final size and mass of the star.

Another hypothesis is that jets actually play a major role in initiating star formation in the first place. Stars are thought to form from enormous, spinning clouds of gas and dust that somehow collapse and contract into blazing balls of fire. To do this, the clouds must get rid of a lot of spin energy, or “angular momentum.”

“One of the best ways to get rid of that is to put it into a jet,” Jayawardhana told SPACE.com. “So these jets might actually be spinning and carrying out the angular momentum of the formed object.”

The new gushing nature of 2M1207a could help shed light on how jets are formed and sustained.

“The only way to test these models for launching jets is to test them at extreme examples,” Jayawardhana said in a telephone interview. The mechanism has to “work for such a low-mass object, and that puts interesting constraints on what types of launching mechanisms might work.”

Because 2M1207a is so small, the discovery suggests gas giant planets in our solar system and beyond could also drive outflows.

“It seems like almost any time you have accretion disk around an object, some of the material that’s accreted is also spewed out,” Jayawardhana said.

Both Saturn and Jupiter are thought to have grown out of accretion disks. Saturn’s disk is still clearly visible in the form of its rings.

Some theorists have proposed an alternative scenario for planet formation different from the standard model in which large gas planets can form from gravitational collapse similar to stars.

If a jet-spewing gas giant were ever spotted, it would be evidence of another common similarity between star and planet formation. Jayawardhana said it is too early to draw that connection, since the new observations pertain only to brown dwarfs.

“I would say this is explicitly a similarity between brown dwarfs and stars,” he said.