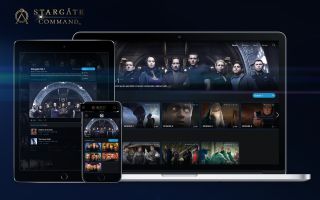 NEW YORK — Stargate fans, dust off those chevrons! new series "Stargate Origins" is launching this fall, but will be available only on MGM's new "Stargate Command" streaming platform, now accessible online as well as to download for iOS and Android.

Space.com had the chance to check out the new platform, which you can see at the Stargate Command website, at New York Comic Con Friday (Oct. 6). It boasts an incredible collection of "Stargate" material, but only some is accessible unless you're willing to spring for a paid account.

While Stargate Command is freely available, fans of the more than 20-year-old franchise (the feature film "Stargate" debuted in 1994) will have to pay a one-time $20 fee to access the new series, whose 10-minute episodes follow the early years of the world-hopping Stargate's discovery. Paid "All Access" users also gain access to all episodes of the three previous "Stargate" series as well as the franchise's three movies until May 15, 2018, according to an MGM statement.

The platform also hosts an editorial section with articles written by in-house writers, pop-culture influencers and fans — plus features like a weekly Director's Diary. The articles are accompanied by quizzes and polls as well as a forum that is already relatively active.

Paid users will also get to see behind-the-scenes material from previous "Stargate" series and "Origins," plus cast interviews and set-building time-lapse videos, MGM representatives have said.