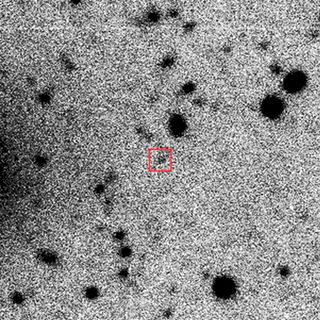 A telescope has captured the first views of NASA's asteroid-sampling OSIRIS-REx spacecraft since the probe launched a year ago.

The Large Binocular Telescope Observatory (LBTO) in Arizona snapped a series of photos of OSIRIS-REx, which is headed toward Earth for a Sept. 23 flyby designed to slingshot the craft toward the asteroid Bennu.

The pictures were taken Sept. 2, when OSIRIS-REx was about 7 million miles (12 million kilometers) from Earth, NASA officials said. The images are cropped and magnified, and black and white are reversed to make the faint spacecraft easier to see. [OSIRIS-REx: NASA's Asteroid Sample-Return Mission in Pictures]

The $800 million OSIRIS-REx (short for Origins Spectral Interpretation Resource Identification Security Regolith Explorer) mission lifted off on Sept. 8, 2016. If all goes according to plan, the probe will rendezvous with the 1,640-foot-wide (500 meters) near-Earth asteroid Bennu in August 2018, study the space rock from orbit for two years, and then go in to snag at least 2.1 ounces (60 grams) of material.

This dirt and gravel will come down to Earth in September 2023, aboard a special return capsule that OSIRIS-REx is toting. Scientists around the world will then study this sample, hunting for organic molecules — the carbon-based building blocks of life as we know it.

Such work should shed light on the role primitive, apparently carbon-rich asteroids like Bennu may have played in helping life get started on Earth, NASA officials have said. OSIRIS-REx's observations could also have planetary-defense benefits, possibly allowing researchers to better understand how dangerous asteroids could be nudged away from a collision course with Earth. (Bennu itself is classified as a potentially hazardous asteroid; there's a very slight chance it could hit our planet late in the 22nd century.)

It's perhaps fitting that LBTO captured these first images of OSIRIS-REx's flyby homecoming; the mission's principal investigator, Dante Lauretta, is based in Arizona as well, at the University of Arizona's Lunar and Planetary Laboratory.

There will be more views of OSIRIS-REx to come, as the spacecraft gets closer and closer to Earth ahead of the Sept. 23 flyby. Indeed, NASA and the mission team are inviting the public to submit photos they snap of OSIRIS-REx over the next few weeks. To learn more, go to http://www.asteroidmission.org/upload-spacecraft-imagery/.