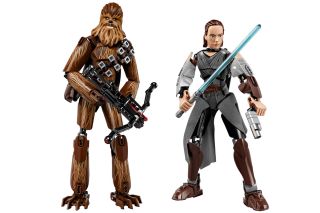 In celebration of Force Friday, Lego just released the latest additions to its "Star Wars" collection, with several new building sets inspired by the upcoming release of "The Last Jedi."

Get ready for the next epic battle in a galaxy far, far away by building your own BB-8, assault walker and iconic spaceships from the "Star Wars" movies. Lego has also released new buildable action heroes for  Chewbacca, as well as Rey and other characters. [Best Force Friday II Deals You Can Buy Now]

These new Lego sets will go on sale on Force Friday (Sept. 1) as early as 12:01 a.m. local time in stores. You can also buy them online.

The new First Order Assault Walker building set comes with 1,376 pieces to build your four-legged killing machine. It also includes five Lego minifigures for the walker to trample — or heroically take it down, if that's what you prefer. ($150)

Join the supreme leader Snoke on the First Order Star Destroyer along with a little BB-9E, two Stormtroopers, a shuttle pilot and an officer. The 1,416-piece building set also comes with little stud shooters to blast your enemies with little green Lego pieces. ($160)

Build your own BB-8 with this 1,106-piece Lego set! Turn the little droid's head by spinning a wheel, and open the hatch to use its little welding torch. ($100)