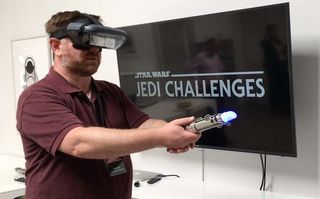 With an AR headset from Lenovo and a lightsaber controller, you can take on Kylo Ren in Star Wars Jedi Challenges.
(Image: © Tom's Guide)

Kylo Ren stood in front of me, and since he already had his lightsaber drawn, I assumed he wasn't there to calmly chat about the relative merits of the First Order. Indeed, the would-be Sith Lord slashed at me with his lightsaber, but my Force sense flashed before my eyes, showing two yellow lines where I could hold my own lightsaber to parry his attacks. Soon, we were trading blows, and I think Rey herself would have been impressed with my mastery of the Force.

My own personal battle with Kylo Ren came courtesy of the $199 Star Wars Jedi Challenges, a joint effort between Disney and Lenovo to bring the Jedi experience right before your eyes via augmented reality. Strap on the Lenovo-built headset, grab your lightsaber and you're ready to bring an adventure from a galaxy far, far away to your very own room.

In addition to Lenovo's Mirage AR headset and lightsaber controller — which bears more than a passing resemblance to the one Luke Skywalker used to wield — the Star Wars Jedi Challenges includes a tracking beacon, which helps pinpoint your location for all those battles with the likes of Kylo Ren and Darth Maul. Jedi Challenges is now available for preorder at Best Buy before it arrives in time for the holidays.

Having wires dangling from the back of a headset might trip up even the nimblest of Jedis, so Lenovo designed the Jedi Challenge headset to be powered by a smartphone, giving you some freedom of movement. You slide your smartphone into the top of the headset — similar to how Google's Daydream View works — and you're ready to ready to battle the Dark Side of the Force.

The 1.04-pound headset sat comfortably on my head when I took Jedi Challenges out for a test battle, and though I was bopping around the floor like the Star Wars kid from that viral video, the headset never slipped out of place. Likewise, the 12.4 x 1.9 inch lightsaber was comfortable to hold, even during extended play sessions.

As impressive as the hardware is — and Lenovo's built a pretty slick, inexpensive headset that uses two fisheye cameras for its inside-out positional tracking — the software struck me as the star of the show. Disney sees augmented reality as a great platform for telling new types of stories, and Jedi Challenges offers three categories of games with more than 30 challenges. So don't expect that headset and lightsaber to gather dust in the back of a closet after a few gaming sessions.

My only hands-on time with Jedi Challenges was in the Lightsaber Battles mode, which gives you the opportunity to build up your fighting skills so that you can eventually take on Darth Vader. I wish I would have had the chance to try out Strategic Combat, which lets you direct a virtual battle that unfolds across your floor. Imagine recreating the Battle of Hoth, positioning rebel forces, gun turrets and other weapons to stop the onslaught of Imperial AT-ATs and stormtroopers.

Jedi Challenges' third mode recreates the Holochess game from Episode IV. You decide which monsters to place on the circular chessboard. As each monster has different strengths and weaknesses, there's some degree of strategy involved beyond just letting the wookiee win. And in addition to harnessing brainpower, Jedi Challenges will also get you up and moving, as my huffing and puffing after fighting off Kylo Ren can attest.

You're playing on the Light Side of the Force in Jedi Challenges. It might add an element of intrigue if you could choose between the Light and Dark sides as you can in other Star Wars games like in Knights of the Old Republic and Battlefront. Disney's focusing on the current iteration of Jedi Challenges, but I think it's safe to say I wasn't the first person to suggest that possibility to the Disney reps I talked to.

And you can see why Disney would like to keep the focus on this new release of Star Wars Jedi Challenges. From what we've seen so far, it's a promising blend of software and hardware that puts you smack dab in the Star Wars universe.