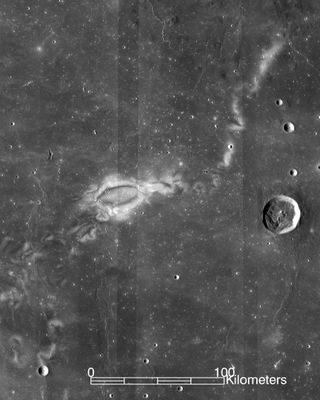 A novel mission concept from NASA would lower a small satellite toward the surface of the moon on a 112-mile-long (180 kilometers) tether. One of the mission's goals would be to uncover the cause of strange, swirling patterns found in more than 100 locations on the lunar surface.

In May, NASA announced that it would invest funds in 10 mission concepts involving small satellites called cubesats. Recently, the agency released more details about one of those concepts — the Bi-sat Observations of the Lunar Atmosphere above Swirls (BOLAS) mission concept.

The mission would involve two small satellites, each about the size of a shoebox, connected vertically above the lunar surface by a long, thin tether, like some kind of miniature sky crane. The cubesat at one end of the tether would orbit the moon at an altitude of about 118 miles (189 km), which would place the second cubesat about 6 miles (9.6 km) above the lunar surface. From that position, the satellite could study those strange features in detail. [Amazing Moon Photos from NASA's Lunar Reconnaissance Orbiter]

To put a lone satellite into orbit around the moon at an altitude of 6 miles (9.6 km) above the surface, for an extended period of time, would require "a prohibitive amount of fuel," according to the statement. This is largely because of irregularities in the moon's gravity along its surface, which can push or pull a satellite out of orbit.

Tethered satellites are therefore "a very natural approach for targeting lunar science," Michael Collier, a BOLAS co-investigator, said in the statement. Collier has been studying tether-based lunar missions since 2015 and called the BOLAS mission concept "groundbreaking."

The satellite would be able to study "lunar swirls," or regions of light-colored material on the moon's surface that, in addition to their lighter color, appear to be less weathered than the dark regions around them. Scientists think the light regions form because of magnetic material in the lunar crust, which would create magnetic-field lines and attract more magnetic material on the surface.

NASA's Lunar Reconnaissance Orbiter mission has been able to provide some information about the cause of the lunar swirls, but not enough to rule out any of the leading theories, officials said in the statement. Collier said he thinks the BOLAS mission "could provide the data the scientific community needs."

The lunar swirls aren't the only focus of the BOLAS mission. The dual spacecraft would also investigate the hydrogen cycle on the lunar surface. The moon's supply of hydrogen could one day be used to fuel rockets launched from its surface, traveling to distant destinations like Mars. The BOLAS mission would gather data about the mechanisms that can implant hydrogen on the moon's surface, and how those mechanisms depend on various physical features of the surface, the space above it and even things like time of day.

"There is a lot of science you can do with this instrument suite," said Timothy Stubbs, principal investigator for BOLAS at NASA's Goddard Space Flight Center.