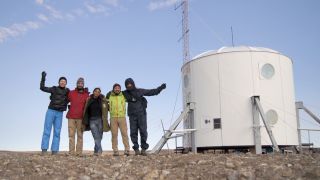 The crew of the second phase of the Mars 160 mission wrapped up its stay at the Flashline Mars Arctic Research Station in mid-August 2017.
(Image: © The Mars Society)

On June 22, The Mars Society launched the second phase of its ambitious Mars 160 Twin Desert-Arctic Analog simulation to study how seven crewmembers could live, work and perform science on a true mission to Mars. Mars 160 crewmember Paul Knightly is chronicling the mission, which will spend 60 days in the Canadian arctic at the Flashline Mars Arctic Research Station (FMARS) on Devon Island after completing a similar 80-day mission at the Mars Desert Research Station (MDRS) in southern Utah in 2016. Here's his fifth and final dispatch from the mission:

We officially ended the Mars 160 mission simulation on Aug. 14, capping off the two-month-long portion of the mission spent in the Canadian arctic on Devon Island. We're all a bit sad we couldn't have stayed on Devon for as long as we had originally planned, but we're grateful for the time we did spend here despite the poor weather conditions. The data and samples that we'll be bringing back home with us will hopefully shed new light on the geological and biological stories of the island and help expand the boundaries of Mars analog research a bit further.

Much like securing an actual research facility on Mars, getting our home for the past month, the Flashline Mars Arctic Research Station (FMARS), secured until the next crew arrives was a time-intensive endeavor. Despite keeping a hectic schedule during our final days, I was able to spend a few moments reflecting in my personal journal on what we've accomplished. I thought about rewording them, but I feel like the raw diary entries capture the feelings of our departure better than I could write them now. The following are some excerpts from our final two days at FMARS. [Inside Mars 160: The Mars Society's Red Planet Simulation in Pictures]

Today is officially the last day of the mission! We exited Sim this morning, and I collected some of my science gear that has been stationed outside of the Hab since just after we arrived. I'm looking out the middle window of the second deck right now. The late summer sunlight is coming in at a low angle, accentuated by smoke lingering from Yusuke's latest cooking experiment: Martian pizza. (It was delicious, by the way.) The sun is getting lower now, as evidenced by the decreasing light conditions over the past few weeks. That, tied with a shift in the wind this morning carrying freezing air. heralds the impending shift to winter. Our first sunset in months is tonight, which is a welcome sight for eyes accustomed to continuous daylight. So we will leave Devon Island as the weather is beginning to turn and just before our summer home turns into a frigid expanse. Getting back to the warm air down south will be a welcome change!

Hoped to get off the island today. Our first flight arrived just before 2 in the afternoon and there was initially enough time to fit in two flights; however, fog in Resolute prevented the second one from getting off the ground. We didn't find out until after we had worked our tails off moving fuel drums and gear between the airstrip and FMARS. Thinking back on our hard work today, I've realized how grateful I am for the selfless and self-starting nature of the crew, and that has made serving with them a pleasure.

So we have one more bonus night here at FMARS. As the generator falls quiet and people start to turn in, the station is calm. The southern and western skies have a soft orange, almost salmon hue to them. Possibly smoke from wildfires down south, but also a function of decreasing daylight. Sunset colors are weird if you haven't seen them for a while. The sun will set tonight, and the rapid changes in daylight over the coming weeks are just another sign of the extreme nature of this place — where months of daylight on end can shift so rapidly to the other end of the spectrum. [Photos: Life in the Arctic]

Looking out across Devon Island and the crater this evening, long shadows are cast by comparatively diminutive rocks. The landing legs of our Hab stretch out cartoonishly far into the crater before meeting with a small shadow of FMARS nearly a kilometer away. They say sunsets on Mars are blue. With the burnt orange hues of the first clear sky I've seen in weeks, and some blue in the dome of the sky, perhaps this isn't too far from what the first astronauts on Mars will see.

Thinking about how I've felt on this adventure, I'm realizing that everything we've experienced will be multiplied nearly 12-fold when compared to a crewed mission to Mars lasting almost two years. The time en route, the time on the surface, the feelings of isolation, the hard time sleeping, grappling with everything being a single color (gray in our case, red in theirs), and even occasional boredom. Even if I never have anything to do with a crewed Mars mission (I hope that I do), I now understand a fraction of what they may experience on their adventure.

As Mars 160 comes to a close, I'm looking back on what we have learned and how this will impact Mars missions going forward. Even today, astronauts prepare for their flights through immersive training, and while it may not be necessary for Mars astronauts to conduct a year- or multi-year-long simulation before going to Mars, spending even just a season at a station like FMARS (modeled after their habitat) would be beneficial. But it is also important for mission planners and controllers to experience mission settings like this firsthand to understand what their crews are going through. Despite all I can say about our experience, for those with the deepest involvement in a humans-to-Mars mission, you really have to be there to understand it. [How Will a Human Mars Base Work? NASA's Vision in Images]

We were able to fly off Devon Island on Aug. 16, leaving us to conclude our mission where it began — in Resolute Bay on the shores of the Arctic Ocean. Our flight over the now snow-free arctic revealed a truly Mars-like landscape as far as the eye can see. Despite how our journey to Mars on Earth began, our return to society will be quicker, with many of us returning home or to the United States by the early part of next week. The sight of multiple buildings and people beyond the six of us is a slight shock to the system that I'm sure will be repeated as we venture to ever more populated areas in the coming days. I think I can speak for the crew that we all enjoyed our simpler and more isolated way of life over the past month and being engaged in our research activities, but there are some things to be missed about life on Earth.

Chief among the things we've missed are washing machines and showers that are warm and last for longer than 3 minutes. Both of these tasks were high on our to-do list, followed shortly by fresh fruit and a cup of coffee made with water that we didn't need to fetch from a river. Fresh meat that doesn't come from a can is also a novelty that is being enjoyed by many of us, and I've got my sights set on my backyard smoker to cook up some ribs shortly after I return home to Arkansas.

We are decades, if not longer, from rapid transportation between the planets that will make a trip to Mars no different than the journey we just made to the arctic. So as exciting as a mission to Mars will be for the first explorers to go, all of them will surely look forward to going home as we are now. Seeing the pale blue dot of Earth against a sunset sky on Mars for the first time will surely be awe-inspiring, but it will also be reminder of the vast gulf of space that exists between the two worlds. At the end of any mission, including the first one to Mars, it will surely feel good to come home.

Paul Knightly is a geologist and PhD student at the Arkansas Center for Space and Planetary Sciences at the University of Arkansas in Fayetteville. He is a member of The Mars Society's Mars 160 Twin Desert-Arctic Analog simulation, where he is conducting geological field research to better understand the arctic environment and its implications for Mars. Follow The Mars Society on Twitter at @TheMarsSocietyand on Facebook. Original article on Space.com.