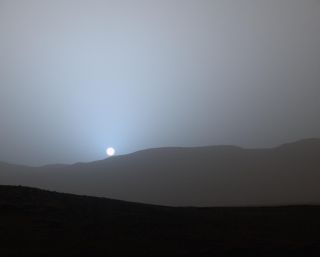 NASA's Mars rover Curiosity has snapped some beautiful photos of a blue-tinged sunset on the Red Planet.

Curiosity captured the images, which mission team members combined into a brief video of the Martian sunset, with the rover's Mast Camera between dust storms on April 15, NASA officials said. The photographs record the first sunset Curiosity has observed in color on the Red Planet, they added.

"The colors come from the fact that the very fine dust is the right size so that blue light penetrates the atmosphere slightly more efficiently," Curiosity science team member Mark Lemmon, of Texas A&M University, said in a statement.

"When the blue light scatters off the dust, it stays closer to the direction of the sun than light of other colors does," Lemmon added. "The rest of the sky is yellow to orange, as yellow and red light scatter all over the sky instead of being absorbed or staying close to the sun."

The images are helping scientists better understand how dust is distributed throughout the Martian atmosphere, NASA officials said.

The 1-ton Curiosity rover landed inside Mars' huge Gale Crater in August 2012, on a mission to determine if the Red Planet could ever have supported microbial life.

The six-wheeled robot succeeded early, gathering evidence that allowed mission scientists to conclude that an area near its landing site was once a potentially habitable lake-and-stream system billions of years ago.

Curiosity is now exploring the foothills of the towering Mt. Sharp, which rises 3.4 miles (5.5 kilometers) into the Martian sky from Gale's Center.

Mt. Sharp's many rock layers preserve a history of Mars' changing environmental conditions over time, so the observations Curiosity makes as it climbs should reveal insights about how the Red Planet shifted from a relatively warm and wet world long ago to the cold, dry desert world it is today, mission scientists say.