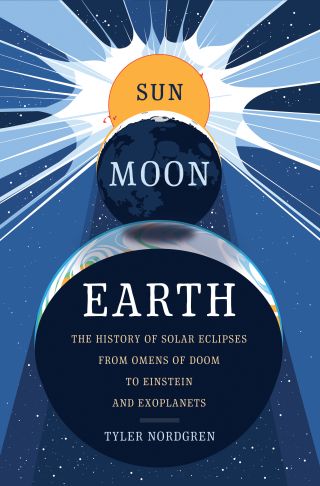 Throughout history, solar eclipses have transformed from terrifying omens into the subject of scientific study, inspiring eclipse chasers to travel the world to witness the natural phenomenon.

The total solar eclipse on Aug. 21 is expected to draw millions of skywatchers to the path of totality, which is about 70 miles (113 kilometers) wide and goes from Oregon to South Carolina. Tyler Nordgren's book "Sun Moon Earth: The History of Solar Eclipses from Omens of Doom to Einstein and Exoplanets" (Basic Books, 2016) traces the natural history of eclipses and how the interpretation of such events has changed over time.

Nordgren is an astronomer and a professor of physics at the University of Redlands in California. After missing his chance to witness the 1979 total solar eclipse that crossed over Portland, Oregon, Nordgren has traveled the world, chasing eclipses. Nordgren is planning to see the Aug. 21 total solar eclipse from the high desert of eastern Oregon. [Gorgeous 2017 Solar Eclipse Posters by Astronomer-Artist Tyler Nordgren (Gallery)]

With the Aug. 21 total solar eclipse just around the corner, Space.com spoke with Nordgren about his book, the history of solar eclipses and the science behind the shadow.

Space.com: Why do we have solar eclipses?

Tyler Nordgren: We have solar eclipses because we're lucky enough to have a moon that is just the right distance from us, so it appears to be the same size in the sky as the sun. So, about twice a year, we go through a period where the moon passes in front of the sun at new moon and then the moon passes through the shadow of the Earth at full moon. And so we get solar eclipses and lunar eclipses.

Space.com: Why is the path of totality different for each solar eclipse?

Nordgren: A total solar eclipse happens roughly every 18 months … so the position of the moon, its distance from Earth, when it crosses in front of the sun — these things change every single time [an eclipse occurs] because we don't live in a perfect clockwork universe where the moon takes exactly 30 days to go around the Earth and the Earth takes exactly 365 days to go around the sun. Every time the alignment works out, the Earth is in a slightly different place in its orbit around the sun, [at a] slightly different time of day. So those paths — those dark shadows that the moon casts across the Earth — trace a slightly different path across the planet, which is why we have gone 38 years without seeing a total solar eclipse here in the continental U.S.

Space.com: What are some of the most significant contributions solar eclipses have made to the field of science?

Nordgren: The Greek philosopher Anaxagoras from about 2,500 years ago … he was really the first person that we can identify from Western culture that quickly identified what caused eclipses — that they were play of light and shadow from the sun on the moon and the Earth. Once he realized that, he was able to make some really startling conclusions. One is that if a total solar eclipse is the moon moving in front of the sun, that means that the moon has to be closer [to Earth] than the sun [is]. Secondly, because [the moon and the sun] do appear to be about the same size in the sky and the sun is farther away, that means that the sun has to be bigger [than the moon]. So now you've just figured out relative sizes.

Then, [Anaxagoras] had the insight that, if seeing a solar eclipse was the shadow of the moon cast onto the Earth, that meant that the moon's shadow has to be something like a big cone out in space, where the base of that cone is the diameter, or the area, of the moon. And then that shadow would narrow as it touched the Earth. So, if you could actually measure the size of that shadow as it swept across the Earth, you knew the moon had to be bigger than that. It may seem trivial today, but 2,500 years ago, a guy, by looking at the shadow of the moon, could figure out the size of the moon, how far away the sun was; by putting all of this together, we could begin to picture the heavens. [10 Solar Eclipses That Changed Science]

Space.com: How has understanding the clockwork of the sky allowed civilizations to evolve?

Nordgren: We could use the timing of these eclipses to better calculate things like the orbit of the moon and the day of the year … If you think about it, a calendar keeps track of the sun — we know that one year goes by when the sun comes back to the same place. A month is the time it takes the moon, approximately, to go around the Earth. So, whenever you have eclipses, you can keep track of where the moon is.

For much of human history, these eclipses helped us keep better track of our calendars, and calendars are what allow you to celebrate the seasons and the solstices, as well as birthdays, Christmas and Easter [among other holidays and events]. We have a lot of religious traditions and celebrations that hinge upon keeping track of the seasons, and the motion of the moon and the sun.

Space.com: Can you explain the sun-moon-Earth relationship and how it controls whether we see a solar eclipse?

Nordgren: The reason we have a moon in the first place is because there appears to have been some sort of enormous impact early in the formation of Earth, soon after it came into being 4.5 billion years ago — and that moon has been slowly spiraling away from Earth ever since. The rate at which it spirals away depends on tidal forces between the Earth and the moon, which depend on the oceans and the placement of the continents. As continents slowly drift across the [Earth's] surface, you get more or less friction between tidal bulges — the big bulges of water that the moon sweeps across the Earth — and the seafloor. So, more or less energy gets dissipated through friction, which speeds up or slows down the moon as it slowly spirals away from Earth.

All of this has an effect on [people on Earth] being able to see a total solar eclipse. Eventually, about 600 million years from now, the moon is going too far away to fully cover the sun, so we will stop having total solar eclipses. But exactly what date that [will] occur [on] and exactly what continent gets to see that last totality — we can't tell that, and that's because of continental drift, or the changing positions of continents.

Space.com: Do other planets in our solar system experience solar eclipses?

Nordgren: No other planet-moon combination in our solar system has a moon that is exactly the right size and exactly the right distance to perfectly cover the sun. Jupiter has four large Galilean satellites, and those moons are each about the same size as our moon. But Jupiter is about five times farther away from the sun than we are, so the sun appears quite small. Eclipses happen — those [Galilean] moons will totally blot out the sun — but those moons are so large that they completely cover the [sun's] corona.

Space.com: Has a similar relationship been observed on any planet outside our solar system?

Nordgren: So far, we have not detected any moons around any exoplanets, but one of the ways we detect those exoplanets is by looking at them as they move in front of their stars. Essentially, we see a tiny eclipse, or transit — the brightness of their stars slowly dim a little bit as the planet moves in front of them. There was something really fascinating discovered this [past] year. One of the stars that had planets discovered through that method is called TRAPPIST-1, which has seven planets orbiting around it. As it turns out, those planets are all so close to one another that — let's say you were standing on the last planet [from the star], TRAPPIST-1h — when the next planet in, TRAPPIST-1g, passes between you and the sun, it gets large enough to appear bigger than a full moon does in our sky. It just so happens that within the error bars quoted by the discovery team, given the distance between the planets, the size of the star and the size of those planets within those error bars, it is possible that if you were standing on planet TRAPPIST-1h, every time planet TRAPPIST-1g comes around, it could totally eclipse the sun. So you could see a total solar eclipse on one planet due to another planet. There is no parallel here in our own solar system. Conceivably, this is the only other solar system we know of at the moment where this might happen. [Do Other Planets Have Solar Eclipses?]

Space.com: You've discussed that a relationship between Earth and the moon makes life possible. Can you elaborate?

Nordgren: The moon does really interesting things for the Earth. One, by having this really large moon orbiting the Earth, it keeps the Earth's obliquity — the angle that our rotational axis makes with the sun — stable, so that we have a constant 23.5-degree tilt, which gives rise to the seasons. Mars, however, has no such moon and appears to have a random tilt, which, throughout history, has wobbled enormously. So Mars has gone through much warmer and colder periods. If [Earth] didn't have this really large moon, we would lose the stability of the seasons on Earth, and that stability of the seasons is one of the reasons why the Earth has remained habitable. We've never gotten outrageously hot or outrageously cold — we've always stayed relatively constant, and that is something that has been very important for the evolution of life, especially intelligent life.

This interview has been edited for length and clarity. You can buy "Sun Moon Earth" on Amazon.