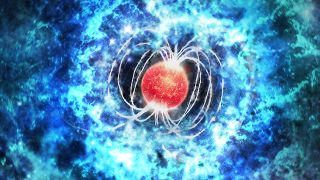 An artist's impression of SN 2017egm showing the superluminous supernova's power source. The ultrabright explosion came when a massive star collapsed to form a rapidly-spinning neutron star with an extremely strong magnetic field, called a magnetar. Debris from the supernova is in blue, and the magnetar is in red.
(Image: © M. Weiss/CfA)

The most powerful exploding stars are popping up in unexpected places, new research indicates. It turns out that these superbright "rebel" supernovas can form in "heavy metal" areas, using elements heavier than hydrogen and helium, scientists said in the new study.

Supernovas happen when huge stars run out of fuel and collapse, creating an explosion that can briefly outshine their host galaxy. Thousands of supernovas have happened in the past decade, but only about 50 of them were "superluminous," meaning they were 100 times brighter than usual supernovas.

New research zeroes in on one supernova, called SN 2017egm, which exploded May 23 within view of the European Space Agency's Gaia satellite, which monitors star positions. If it had exploded in the Milky Way, it would have appeared as bright as the full moon does from Earth, researchers said in a statement. [Supernova Photos: Great Images of Star Explosions]

In fact, SN 2017egm was not only superluminous, but superclose: At just 420 million light-years away, it was three times closer than any other observed supernova of its type.

More strangely, the supernova exploded in a spiral galaxy with a high concentration of elements heavier than hydrogen and helium. (These elements are called "metals" in astronomy.) Before this, researchers had found superluminous supernovas in dwarf galaxies, which have low metal content, according to the statement.

This work marks the first time astronomers have identified a superluminous supernova that exploded in a large spiral galaxy, and in a metal-rich area. So when it comes to forming these explosions, a lack of metals may not be as important as astronomers had thought.

"Superluminous supernovas were already the rock stars of the supernova world," Matt Nicholl, lead author of the study and an astronomer at the Harvard-Smithsonian Center for Astrophysics in Cambridge, Massachusetts, said in the statement. "We now know that some of them like heavy metal, so to speak, and explode in galaxies like our own Milky Way."

The researchers also investigated what makes SN 2017egm so bright. They concluded that the supernova may be powered by a rapidly spinning dead star called a magnetar. Such ultradense, spinning neutron stars created by supernovas could continue to generate magnetic power that would heat up the expanding gas left over from the supernova.

SN 2017egm shares magnetar properties with other superluminous supernovas, but the researchers noted that the newly discovered supernova does have some differences.

For example, SN 2017egm might have ejected less mass than its supernova counterparts because its massive star might have shed mass before exploding. Also, the spin rate of SN 2017egm's magnetar may be slower than usual.

The supernova is currently invisible to astronomers because it is too close to the sun, but it will re-emerge on Sept. 16 after more than two months of obscurity.

"This should break all records for how long a superluminous supernova can be followed," Raffaella Margutti, study co-author and an astronomer at Northwestern University, said in the statement. "I'm excited to see what other surprises this object has in store for us."

The research was accepted for publication in The Astrophysical Journal Letters, and it is available online at arXiv.org. Nicholl's team studied the supernova on June 18 with the 60-inch (152 centimeters) telescope at the Smithsonian Astrophysical Observatory's Fred Lawrence Whipple Observatory in Arizona.