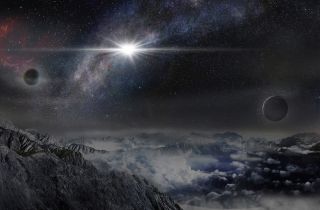 The super-luminous supernova ASAS-SN15lh is the most luminous ever measured. Here, an artist's illustration visualizes what it would be like to see the supernova from an exoplanet located about 10,000 light years away.
(Image: © Beijing Planetarium/Jin Ma)

A blazing-bright object appears to be the most luminous supernova ever witnessed, and it's blowing the top off researchers' models of how such explosions are powered.

When certain stars reach the end of their fuel supply, or gain a sudden influx of new material, they explode into a brilliant last stand called a supernova. This new object appears to be 200 times more powerful than the most commonly found type of supernova, likely belonging to a rare class of "super-luminous supernovas."

The All-Sky Automated Survey for Supernovae (ASAS-SN) searches for changing spots of light in the sky, and caught the glowing feature when it brightened in June. [Supernova Photos: Great Images of Star Explosions]

The researchers announced today (Jan. 14) that the bright spot is 3.8 billion light-years from Earth, in the sky at the border of the southern constellations Indus and Tucana. It can't be seen with the naked eye at this distance — but if this object were 8.6 light-years away like Sirius, the brightest star in Earth's sky, it would appear to shine as brightly as the sun, researchers said.

All told, the object put out about 570 billion times more light than the sun at its peak, and has more than twice the luminosity of the next-most-powerful supernova ever found. (When researchers say "most powerful" here, it's referring to the total radiation blasting out into space.)

After the 14-cm robotic telescopes of the star survey ASAS-SN (which researchers refer to as "Assassin") returned information on the object, the next step was to take a spectrum: By measuring the wavelengths of light that the supernova was putting out, researchers could figure out what it was made of and, potentially, how far away it was. Researchers quickly turned their telescopes toward the new point of light to learn more about it, but the first results were baffling.

"It didn't look like anything we had seen from the 200 supernovas we had discovered [with ASAS-SN]," said Subo Dong, lead author on the new work and an astronomer at the Kavli Institute for Astronomy and Astrophysics at Peking University. Eventually, he told Space.com, he and others realized that if the object were a particular distance away it might match the signature of a certain type of super-luminous supernova.

Once they were able to take an additional measurement of the spectrum and work out how far away the light source was, the curious scientists — by then a large international team — could compute how powerful it must be: "We can calculate its peak luminosity, and that established the supernova to be the most luminous supernova yet found," Dong said.

"The feature which makes it the most unique is just its overall luminosity," said Ben Shappee of the Carnegie Observatories in California, one of the researchers who took the first spectrum of the object from a telescope in Chile and a paper co-author. "It has other features which are part of a rare class called super-luminous Type 1 supernovae, which basically are very luminous and don't show any hydrogen or helium. So it's already part of this rare class, and it's the most extreme example of this rare class," he told Space.com.

But identifying the supernova was only the beginning of the mystery: Now, the researchers are exploring what could be powering the massive explosion.

The mechanisms behind normal supernovas are relatively well understood, the researchers said, but over time a class of extra-strong supernovas has been uncovered that challenge those assumptions.

"If you would have asked many people 15 years ago whether such explosions could even occur in the normal universe, the popular opinion was no," Avishay Gal-Yam, an astrophysicist at the Weizmann Institute of Science in Israel, told Space.com. Gal-Yam has researched the formation of super-luminous supernovas and written a recent review paper on the potential processes. He was not involved in the new study.

A little more than a decade ago, most astrophysicists would have assumed such large explosions only happened in the early universe, when very massive stars were more common, he said. But as the extra-strong supernova were discovered, researchers developed models of how exploding stars could get that extra boost.

One strong possibility, the researchers said, is that this supernova is powered by a "rapidly rotating, highly magnetic neutron star" — that is, a magnetar. When the host star explodes into a supernova, sending gas streaming off into space, it might leave behind a tight, whirling mass of neutrons about the size of a city generating tremendous magnetic power and launching a highly magnetized wind as it slows down. That magnetic power could heat up the expanding gas and boost the brightness of the explosion. But the newly found supernova may be too bright even for this explanation — the magnetar at its center would at the very least have to be spinning about 1,000 times per second and generating a magnetic field around 10-100 trillion times the power of Earth's to lead to that level of brightness, which is at the very upper limit the model can support.

Potentially, it could just be a ridiculously massive star that exploded, because heavier stars appear to generate brighter supernovas, the researchers said. If that were the case, a very large amount of heavy, radioactive metal would be created, and the energy from that material's decay would affect the way the supernova fades, giving scientists something to watch for as they study this object. Or the gas expelled in the supernova could have hit an outer layer of gas and created a shockwave — but the supernova shows no signs of hydrogen or helium, the cloud's most probable makeup, making this scenario less likely. [Dissecting a Supernova: A Star Explosion Post-mortem (Videos)]

Understanding these massive explosions is one of the big puzzles in physics today, Gal-Yam said, and this new supernova is useful because it pushes the limits of current models, and can help differentiate between them.

"Looking for the most extreme events is actually interesting, it's not just 'this is the most luminous, the record-holder,' and so on," he said. "It's always nice to be the 'most something,' but it's actually an interesting physical test because each of these models have different ranges of energy that they can provide. And it could quite well be that one model can provide only so much, and the other one can provide a little bit more."

This particular supernova should be visible for a few more years, the researchers said, and the way it fades will also help reveal what's going on.

"We're following this with many different telescopes; with Swift Space Telescope, the Hubble Space Telescope and many ground-based telescopes from around the world to basically see how it fades with time," Shappee, the Carnegie Observatories astronomer, said. "That gives you a sense of what's powering it and also, as it expands with time, typically for a normal supernova you see deeper and deeper into the object."

Although super-luminous supernovas happen infrequently, they could be a key source of the heavier elements in our galaxy, making them a particularly tantalizing target to analyze. Plus, the researchers are curious about what effect the extreme events have on their host galaxies — perhaps ejecting all the gas from a small galaxy and halting star formation, Gal-Yam suggested.

"Everything that's around you that's not hydrogen or helium is actually made inside of a star and distributed in the galaxy through supernova explosions," Shappee said. "In addition, supernovae inject momentum into their galaxies and actually can change their morphologies."

"If we pin down […] what's actually exploding, to get a better idea of the details, then you can actually inform how this would affect its host galaxy," he added.

The new research was detailed in Science today (Jan. 14).