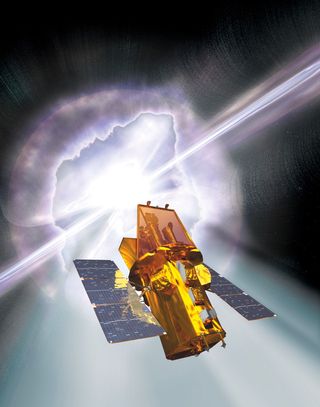 A NASA space telescope built to seek out the most powerful explosions in the universe has earned top billing on the space agency's list of nine astronomical observatory missions.

The space-based Swift X-ray observatory took the top spot in NASA's latest biannual review of its astronomy missions. The study, which does not include the Hubble Space Telescope and Chandra X-ray Observatory, evaluates the scientific performance of the remaining space telescopes to determine if they should continue operations and what their level of funding should be.

"The entire Swift team is delighted that NASA has recognized the high priority of our scientific mission and has extended it for at least another two years," David Burrows, of Pennsylvania State University, said in a statement.

Burrows serves as the lead scientist for Swift's X-ray telescope.

The Swift observatory relies on three instruments to discover and measure gamma-ray bursts, the universe's most energetic explosions. These brief but powerful explosions occur roughly once a day, lasting only a few milliseconds to a few hundred seconds. Scientists think that the powerful bursts are created when black holes and neutron stars form.

Swift not only detects these puzzling phenomena, it also provides a rapid response notification that allows both space- and ground-based telescopes around the world to study their afterglow.

Launched in 2004, Swift has provided several notable detections of gamma ray bursts, including one that occurred approximately 520 million years after the Big Bang. The finding ensures that the telescope will continue to operate for at least another two years.

In addition to Swift, the other 8 astronomical telescopes reviewed by NASA were Fermi, Kepler, MaxWISE, NuSTAR, Planck, Spitzer, Suzaku, and XMM-Newton. Hubble and Chandra were reviewed separately.

"Swift continues to provide unique and exciting science both as stand-alone results and as part of multi-wavelength campaigns," the review said. "Swift is the premier facility for multi-wavelength time-domain astronomy in the world."