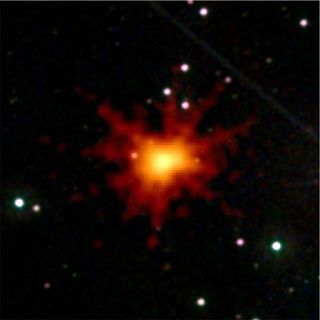 A violent cosmic explosion has unleashed the brightest blastof X-rays ever detected from distant space, a signal so bright it temporaryblinded the NASA space telescope assigned to spot it.

This recent event, dubbed GRB 100621A, was particularly powerful.

The onslaught of light in X-ray wavelengths, which areshorter than visible light wavelengths, quickly overwhelmed the detector when itimpacted June 21.

"The burst was so bright when it first erupted that ourdata-analysis software shut down," said Phil Evans, a postdoctoralresearch assistant at the University of Leicester in the United Kingdom whowrote parts of Swift's X-ray-analysis software.? "So many photons werebombarding the detector each second that it just couldn't count them quicklyenough. It was like trying to use a rain gauge and a bucket to measure the flowrate of a tsunami."

Light from this explosion traveled through space for 5billion years before slamming into Swift, overwhelming its X-ray camera. Theobservatory, launched in November 2004, was designed specifically to hunt forgamma-ray bursts, though scientists didn't count on a blast quite so strong.

GRB 100621A was the brightest blast of X-ray light sinceSwift's X-ray telescope began observing in 2005.

"Just when we were beginning to think that we had seeneverything that gamma-raybursts could throw at us, this burst came along to challenge ourassumptions about how powerful their X-ray emissions can be," Gehrelssaid.

One for the record books

After the shutdown, Swift quickly got back online, andscientists were able to recover the data the observatory acquired during theonslaught. The observations allowed astronomers to learn more about thesemysterious explosions, including just how bright they can be.

"When I first saw the strange data from this burst, Iknew that I had discovered something extraordinary," Evans said.? "Itwas an indescribable feeling when I realized, at that moment, that I was theonly person in the whole universe who knew that this extraordinary event hadoccurred.? Now, after our analysis of the data, we know that this burst is onefor the record books."

Gamma-ray bursts focus most of their energy in theshort-wavelength, high-frequency range of X-rays and gamma-rays. In fact, theydon?t stand out at all in optical and ultraviolet wavelengths, emitting only amiddling amount of light compared to other objects in the sky.

When a very massive star runs out of fuel and reaches theend of its life, it will collapse into an extremely dense blackhole. This event releases an explosion of energy, including some that gets channeledinto beams of gamma-ray and X-ray light.