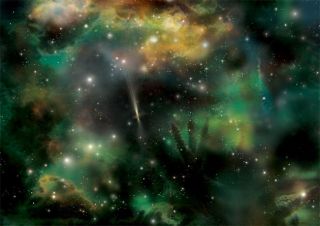 This artist's illustration shows a gamma-ray burst in a dusty region of intense star formation. If a dust cloud lies between the burst and Earth, the optical light will be almost entirely absorbed, but the gamma-rays and X-rays will easily penetrate the dust.
(Image: © Aurore Simonnet/Sonoma State University, NASA Education & Public Outreach)

PASADENA, CALIF. ? Some of the most powerfulexplosions in the universe are invisible. But astronomers are a sneaky bunch.By monitoring X-rays and gamma rays, they're able to see what's going on.

Todayastronomers said that a certain type of gamma-ray burst, the most energeticexplosions in the universe, can light up areas of galaxies, but only inthese more energetic wavelengths of the electromagnetic spectrum, revealingintense star formation and death.

A survey ofso-called "dark"gamma-ray bursts, which shine brightly in the gamma and X-ray parts of thespectrum but show barely a spark of visible light, found that these beacons canshed light on the dusty corners of galaxies wherestars are born.

"Ourstudy provides compelling evidence that a large fraction of star formation inthe universe is hiddenby dust in galaxies that do not appear otherwise dusty," said teammember Joshua Bell of the University of California, Berkeley.

Thefindings were announced here today at the 214th meeting of the AmericanAstronomical Society.

Starformation occurs in dense clouds that quickly fill with dust as the mostmassive stars rapidly age and explode, spewing newly created heavier elementsinto the interstellar medium to seed the formation of second-generation stars.

Butmeasuring how much dust has built up in this process in the most distantgalaxies is difficult. Gamma-ray bursts could aid that accounting process.

Long-durationgamma-raybursts are thought to originate from the explosion of massive stars,creating two pencil-like beams of light bright enough to be seen from as faraway as 13 billion light-years, near the limits of the observable universe.

While mostgamma-ray bursts have a bright afterglow in the visible spectrum, some seem tolack this feature entirely, leaving investigators puzzled for the last 10years.

Somespeculated that these "dark" gamma-ray bursts were simply so far awaythat their visible afterglow shifted out of the optical range through awell-known process called redshift: Light from objects moving away from usshifts to the red end of the spectrum as its wavelengths are stretched. Theshift, known as the Doppler phenomenon, is experienced on Earth when soundwaves from an ambulance change pitch when the ambulance moves toward you vs.away from you.

But the newstudy, which focuses on 14 "dark" gamma-ray bursts, found that eachof these bursts had a host galaxy perfectly visible to optical telescopes. Ifredshift were causing the bursts to appear "dark," optical telescopeswouldn't be able to see the host galaxies either.

Instead,the study showed that "dark" gamma-ray bursts have afterglows likeany other, but dusty patches in the galaxies obscure the signal.

"Wethink we've solved most of the mystery of what actually makes them dark,"said study leader Daniel Perley, a UC Berkeley graduate student.

Thefindings suggest that gamma-ray bursts may be able to help track the rate atwhich stars form and die in distant galaxies, and confirm previous estimatesthat "25 percent of the time, when massive stars form, they form in adusty place,? Perley said.

"Thedust is probably in clouds and knots around the forming stars," he added.

The studyindicates that there could be much more dust than has been suspected as aresult of measurements using other techniques, and "dark gamma-ray burstscould provide a complementary way of answering the question of how much starformation was going on inside galaxies in the early universe," Perleysaid.