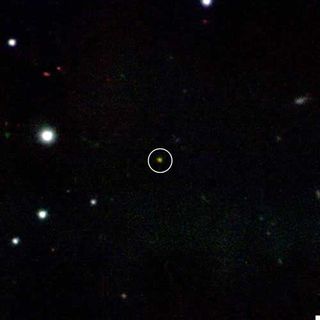 Once a gamma-ray burst is detected from space, other telescopes take a look. Here, the fading infrared afterglow of GRB 090423 appears in the center of this false-color image taken with the Gemini North Telescope in Hawaii. The burst is the farthest cosmic explosion yet seen.
(Image: © Gemini Observatory/NSF/AURA, D. Fox and A. Cucchiara (Penn State Univ.) and E. Berger (Harvard Univ.))

A stellar explosion has smashed the record for mostdistant object in the known universe.

The gamma-ray burst came from about 13 billion light-yearsaway, and represents a relic from when the universe was just 630 million yearsold.

"It easily surpassed the most distant galaxies andquasars," said Edo Berger, an astrophysicist at Harvard University and aleading member of the team that first demonstrated the burst's origin. "Infact, it showed that we can use these spectacularevents to pinpoint the first generation of stars and galaxies."

"The burst most likely arose from the explosionof a massive star," said Derek Fox, an astrophysicist at Penn StateUniversity. "We're seeing the demise of a star — and probably the birth ofa black hole — in one of the universe's earliest stellar generations."

Gamma-ray bursts mark the dying explosion of large starsthat have run out of fuel. The collapsing star cores form either black holes orneutron stars that create an intense burst of high-energy gamma-rays and formsome of the brightestexplosions in the early universe.

A light-year is the distance that light can travel in ayear, or about 6 trillion miles (10 trillion kilometers). So astronomers areseeing this particular burst as it existed 13 billion years ago, because thelight took that long to reach Earth observers.

NASA's Swift satellite first detected the ten-second-longgamma-ray burst in the early morning on April 23, and quickly swung about topoint its Ultraviolet/Optical and X-Ray telescopes.

The satellite found a fading X-ray afterglow, but novisible light. That alone suggests a very distant object, Berger explained,because the ongoing expansion of the universe eventually stretches all visiblelight into longer infrared wavelengths.

Astronomers from Europe and the U.S. quickly scrambled tofollow up on the stunning discovery. They found that the infrared light of theafterglow had the highest redshift ever measured, meaning that the wavelengthshad been very stretched out during their long journey.

The Swift satellite had previously made similarrecord-breaking discoveries, such as a gamma-ray burst detectedin September 2008. That burst came from an exploding star 12.8 billion light-yearsaway.

Swift's new find may indicate an active early universe,even as scientists still try to understand what existed so close to the startof it all.

"We now have the first direct proof that the younguniverse was teeming with exploding stars and newly-born black holes only a fewhundred million years after the Big Bang," Berger said.

Last week's announcement of a giantmystery blob discovered near the dawn of time suggests that even largerobjects such as galaxies may have also been forming, when the universe was just800 million years old.