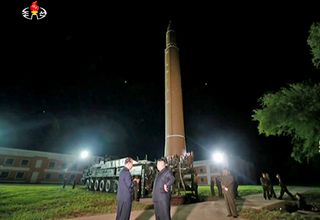 This image captured from (North) Korean Central Television on July 29, 2017, shows North Korean leader Kim Jong-un talking to an official prior to the North's launch of its second Hwasong14 intercontinental ballistic missile on the previous day.
(Image: © Yonhap News/Zuma)

The ICBM's re-entry vehicle (RV) — which would protect the missile's nuclear warhead during an operational launch — likely broke apart toward the tail end of Friday's (July 28) test flight, according to missile expert Michael Elleman.

Elleman studied video captured by a weather camera mounted on the roof of a TV station in Muroran City, on the Japanese island of Hokkaido. This camera happens to cover the patch of sky where the RV came back to Earth during the July 28 test, which was the second flight of North Korea's Hwasong-14 ICBM. [Images: North Korea's Rocket and Missile Program]

The weather-cam footage shows that, at an altitude of about 12 miles (20 kilometers), the RV got so hot that it began to glow. At 2.5 miles to 3 miles (4 to 5 km) above sea level, "the RV appears to be shedding small radiant objects and is trailed by an incandescent vapor," Elleman, a senior fellow for missile defense at the International Institute for Strategic Studies, wrote yesterday (July 31) on the North Korea analysis site 38 North. "At an altitude of 3 to 4 km [1.9 to 2.5 miles], the RV then dims and quickly disappears."

If the RV had remained intact, the glow would have remained visible until the vehicle passed behind some mountains between it and the camera, Elleman added. So the RV apparently disintegrated a few miles above Earth's surface — not coincidentally, just when it was experiencing "maximum stressing loads," he wrote.

"If this assessment accurately reflects reality, North Korea's engineers have yet to master re-entry technologies, and more work remains before [leader] Kim Jong-un has an ICBM capable of striking the American mainland," Elleman concluded.

That's the good news for the United States, South Korea and Japan, all of which nuclear-armed North Korea has repeatedly threatened to destroy. But there's bad news, too: The Hwasong-14 has demonstrated worrying range on both of its flights to date. (The first launch of the ICBM occurred on July 4.)

Indeed, in its current form, the missile may be able to hit major cities on the U.S. West Coast, Elleman said yesterday during a conference call with reporters organized by the U.S.-Korea Institute (USKI) at Johns Hopkins University's School of Advanced International Studies. (38 North is a USKI program.)

Putting warheads atop ICBMs requires miniaturizing the bombs. If North Korea has not already mastered this technology, they'll likely do so soon, according to American intelligence officials. Indeed, the U.S. Defense Intelligence Agency recently predicted that the rogue nation will have a reliable nuclear-armed ICBM system by sometime next year.