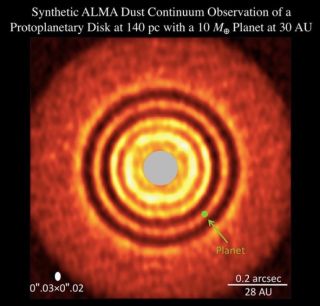 This image, generated by a computer model, simulates the evolution of a protoplanetary disk with one "super-Earth" alien world. It reveals similar features as the image of an actual disk such as HL Tauri observed with ALMA.
(Image: © Ruobing Dong)

NASA's Kepler space telescope and other instruments have revealed the existence of thousands of alien planets. Most of them are "super-Earths" — rocky worlds with Earth- to Neptune-size masses.

But the existence of so many super-Earths seems to contradict astronomers' understanding of planet formation. Indeed, observations of newborn solar systems show features that seem to need the presence of more massive gas giants like Jupiter.

Scientists may have just solved that mystery, or at least part of it. University of Arizona postdoctoral researcher Ruobing Dong and his colleagues propose that super-Earths can carve out multiple gaps in the disks of gas and dust that surround young stars. [Gallery: The Strangest Alien Planets]

Young stars form with clouds of gas and dust around them, which, as the star spins, eventually coalesce into a disk. As tiny dust grains in this disk collide, they form larger bodies, and those bodies attract more gas and dust in turn. Eventually, some accrete enough mass to form protoplanets.

Some young planets eventually pull in enough material that a gap opens up in the disk. Astronomers looking at stars with protoplanetary disks have generally thought the gaps would need a large planet to take up so much material — a gas giant planet like Jupiter.

Dong and his team used computer simulations to reproduce and help explain some of the observations telescopes have made of young stars with their protoplanetary disks still intact — specifically, the stars HL Tauri and TW Hydrae, which the Atacama Large Millimeter/submillimeter Array (ALMA) in Chile observed in 2014 and 2016, respectively.

ALMA saw that the disks around those stars had gaps in them, making a ringlike pattern. Some of the gaps were quite close together — likely too close, in fact, for the orbits of giant planets to remain stable, the researchers said.

"Among the gaps in HL Tauri and TW Hydrae revealed by ALMA, two pairs of them are extremely narrow and very close to each other," Dong said in a statement. "In conventional theory, it is difficult for a planet to open such gaps in a disk. They can never be this narrow and this close to each other for reasons of the physics involved."

The computer simulations performed by Dong and his team produced disks like those observed by ALMA — even without any gas giants in the mix.

"One super-Earth turned out to be sufficient to create the multiple rings and multiple, narrow gaps we see in the actual observations," Dong said.

Super-Earths could, at least temporarily, remain stable even when they are in orbits close together, the researchers added. So the new results, which were published in the July 13 issue of The Astrophysical Journal, could help to explain the seeming disconnect between the known exoplanet population and planet-formation theories: Gas giants may not be necessary to carve out gaps.